Choosing a line/plane to separate two classes of binned data

In high energy physics I know it is common task to find the best separation point between two classes of data, usually signal and noise. This separation point is usually determined by first binning the data, then making a decision based on maximizing the amount of signal while minimizing the amount of noise present on one side of the cut. For example, in the image below, blue might be signal, and red might be noise. You may hope for to set a cut that you'll expect in the future will have 70% signal on one side, and 30% noise. You may wish instead to get nearly all the signal, despite a large amount of noise. Then you'll set a cut that gets, say, 95% of the signal, but 60% of the noise.

It is important not to make a parametric assumption about the distribution that both the signal and the noise are considered samples from.

How does this procedure generalize to $N$ dimensions? How would a statistician approach this problem? Is there a principled or named way of doing so?

Below is an image I found on the web that depicts a one dimensional example of this scenario. One might choose to separate the red and blue data (make a cut) possibly at 0.1, or perhaps at 0.4. Maybe ignore the bit of blue showing in the 0.8 - 0.9 bin for this example! 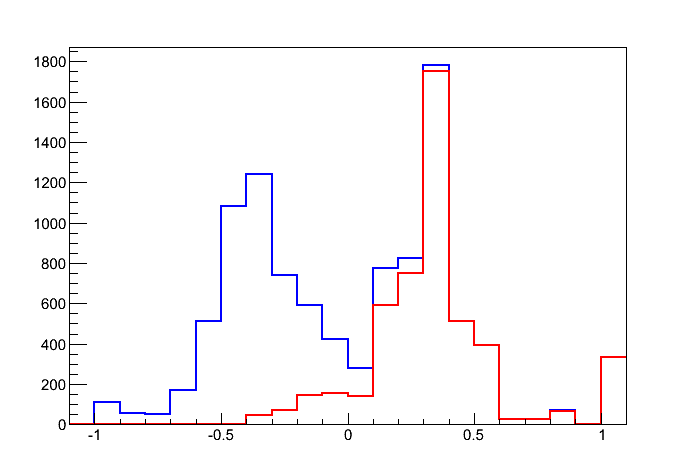 I work with machine learning algorithms, so I can only tell you how I would approach the problem. If I had access to labeled data (like the blue/red data points in your example), I would employ a linear C-SVM, which:

I apologize if you are already aware of this class of algorithms...

Not the answer you're looking for? Browse other questions tagged distributions nonparametric histogram decision-theory or ask your own question.

3
How to find the threshold between two histograms at fixed false positive rate?
0
Flatfield correction (differences of distributions)
4
Why do the terms in L2 Regularized likelihood represent Gaussian distributions?
5
Distribution of the inner product between a noise-free and a noisy signal
1
How to estimate the probability that a single value follows the same distribution as a a set of values