I would like to combine the forecasted and backcasted (viz. the predicted past values) of a time-series data set into one time-series by minimizing the Mean Squared Prediction Error.

I would like to combine the data points of $Y_f$ and $Y_b$ into a imputed data point Y_i for each month. Ideally I would like to obtain the weight $w$ such that it minimizes the Mean Squared Prediction Error (MSPE) of $Y_i$. If this is not possible, how would I just find the average between the two time-series' data points?

As a quick example:

I would like to get (just showing the averaging... Ideally minimizing the MSPE) 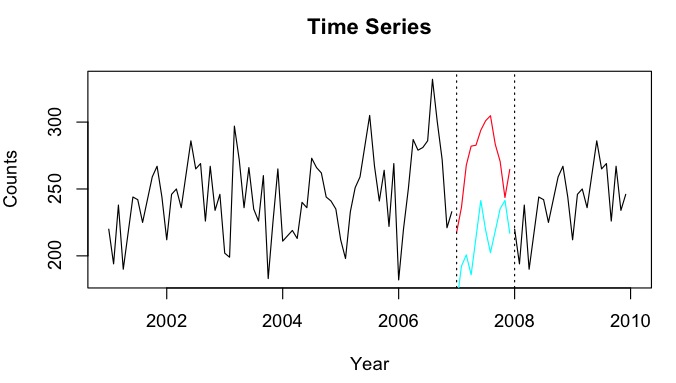 Assuming you have the Squared Prediction Errors for the forecast and backcast individually I would recommend this: Let w be a vector of length 12, let m be the month that you are interested in.

The smoothed value does not have the simple form you guess. For a gaussian stationnary time series with known covariance structure, the estimated $ \widehat{Y}_{t}$ for $t$ in the gap can be found by solving a linear system.

When the time series model can be put in State Space (SS) form, the FI smoothing is a standard operation based on Kalman filtering and it can be done e.g. using available R functions. You simply need to specify that the values in the gap are missing. The smoothing algorithm estimates the hidden state $\boldsymbol{\alpha}_t$ which contains all the relevant information about $Y_t$ for $t$ in the gap. ARIMA models can be put in SS form.

Interestingly, the FI smoothing can be written as a combination of two filters: one forward and one backward, leading to a formula of the kind you expected, but for the hidden state estimation $\boldsymbol{\alpha}_t$ (forecast and backcast), but not for the observation $Y_t$. This is known as Rauch-Tung-Striebel filtering.

At least in the multiplicative versions, 'ad hoc' forecasting procedures like Holt-Winters rely on stochastic models with no simple FI algorithms since they can not be put in SS form. The smoothing formula can probably be approximated by using SS model, but it is much simpler then to use Structural Time Series models with log transformations. The 'KalmanSmooth', 'tsSmooth' and 'StructTS' functions of the R stats package can do the job. You should have a look at the books by Harvey or by Durbin and Koopman cited in the R help pages. The smoothing algorithm can provide a conditional variance for the estimated $Y_t$ and can be used to build smoothing intervals, which usually tend to be larger in the middle of the gap. Note however that the estimation of Stuctural Models can be difficult. 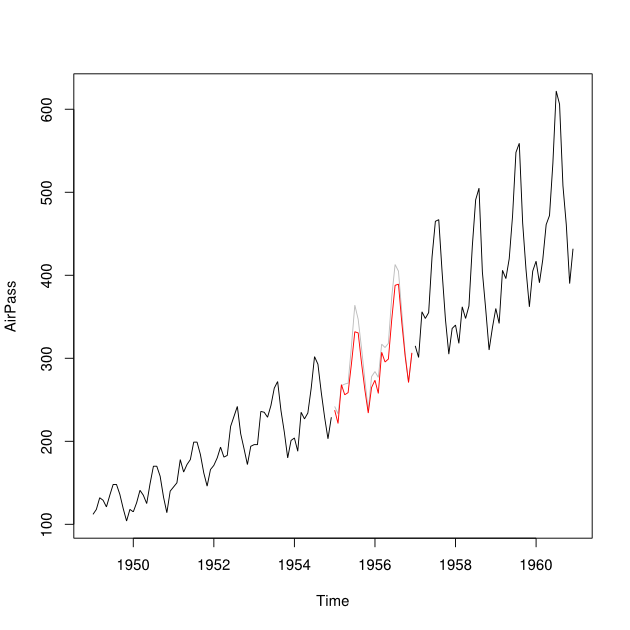 I find your suggested approach, of taking the means of the fore- and back-casts, interesting.

One thing that might be worth pointing out is that in any system exhibiting chaotic structure the forecasts are likely to be more accurate over shorter periods. That isn't the case for all systems, for example a damped pendulum could be modelled by a function with the wrong period, in which case all the medium term forecasts are likely to be wrong, while the long term ones are all going to be very accurate, as the system converges to zero. But it looks to me, from the graph in the question, that this might be a reasonable assumption to make here.

This gives a little weight of the backcast on the first element. You could also use n-1, without the subscripts at the end, if you wanted to use only the forecast value on the first interpolated point.

I don't have your data, so let's try this on the AirPassenger dataset in R. I'll just remove a two-year period near the centre:

And there's your interpolation. 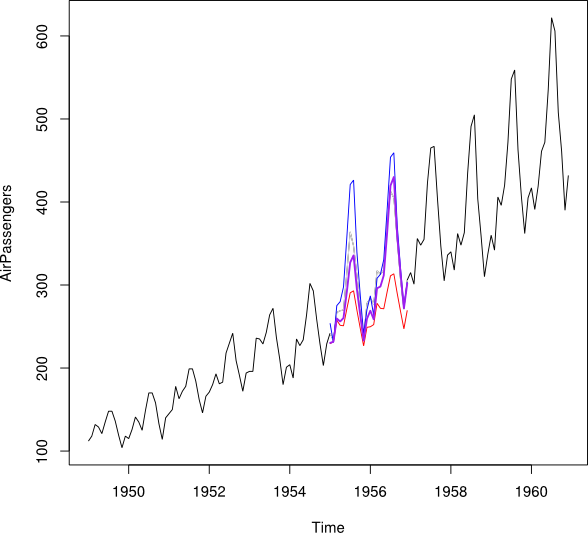 Of course, it's not perfect. I guess that's a result of the patterns in the earlier part of the data being different to those in the latter part (the Jul-Aug peak is not so strong in earlier years). But as you can see from the image, it's clearly better than just the forecasting or the back casting alone. I would imagine that your data may get slightly less reliable results, as there is not such a strong seasonal variation.

My guess would be that you could try this including the confidence intervals too, but I'm not sure of the validity of doing it as simply as this.

Not the answer you're looking for? Browse other questions tagged r time-series forecasting data-imputation or ask your own question.

6
How to estimate missing data?
11
Multiple imputation for missing count data in a time series from a panel study
5
Using information on both sides of a 'gap' in time series data for imputation