How can I measure difference between non-parametric data with many zeros?

I'm comparing two groups of students by their course activity and I'm struggling a little to determine the best way to test for significant difference.

The data is non-normal, and very prevalent with zeros, so it doesn't work well with many of the more common tests.

I've tried Mood's median but the median most often ends up being zero because of the prevalence of that number. Is this OK?

If not, can anyone recommend a test which would be suitable for comparing the two rows of data above?

EDIT: Here is some sample data - apologies for not including copy/pastable numbers originally. I'm comparing activity on a daily basis, so Group 1 Day 1 vs Group 2 Day 1. And then comparing each day in the 5 days of the course. Each number logged within the groups records the number of times an individual student has accessed learning materials within a course. So, each number shows how 'involved' a particular student has been within a course. Each number is an individual student on that particular day. Group 1 and Group 2 have separate samples of students, but the course is the same, barring one small difference in delivery style.

Here is a token visualization. I am partly drawing on my own experiences (prejudices, if you prefer) as a teacher, mainly but not exclusively at university level. It often seems that the fine structure of different kinds of students, or of different student attitudes and behaviours, is much more interesting and important than trying to test group differences through means or medians.

Any way, if these dataset sizes are typical, you can keep quite faithful to the detail in the data. 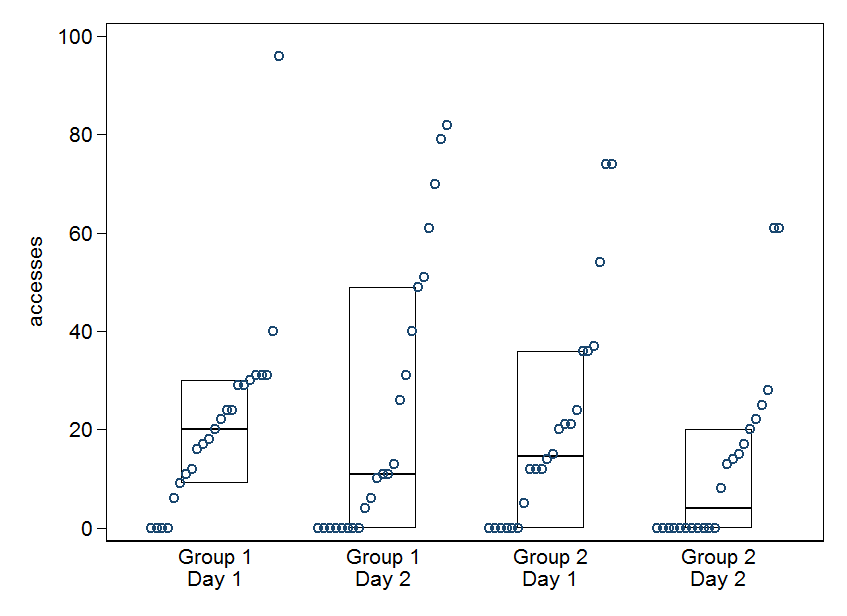 The graph shows a quantile plot for each subset, i.e. the quantiles are just the values ordered from smallest to largest and plotted against a tacit cumulative probability scale. On that is superimposed the now conventional boxes for medians and quartiles, with an understandable but predictable awkwardness that the lower quartile will be zero if a quarter or more of the students have zero accesses. (In principle, that could also happen to the median and upper quartile if the fractions of zeros were large enough.)

The graph has a small merit of being explicit about repeated zeros. Other simple but important features are occasional really keen (or confused?) students, drop-off from Day 1 to Day 2, etc. Hybridising quantile and box plots in this way I learned from papers by Emmanuel Parzen. Box plots themselves I regard as widely oversold, as they so often omit key detail in the tails of the distribution. (For those interested, the graph was drawn in Stata using my own stripplot command, which is downloadable from SSC.)

As suggested earlier, splitting into zeros and non-zeros and looking at means and medians for the latter only is a possibility.

Not the answer you're looking for? Browse other questions tagged statistical-significance nonparametric experiment-design or ask your own question.

13
Graphing small samples
4
Why do means appear outside the boxplot?
6
Boxplot for data with a large number of zero values
0
One Way ANOVA, 3 groups with unequal sample sizes

6
Stratified sampling with multiple variables?
4
Avoiding fallacies when analysing individual data at group level
2
Analysis method for count data with unequal sample sizes and categorical predictors?
0
How to compare distributions of two groups where each group has multiple observations from a small group?
4
How to compare pre- and post-tests when subject identifier is missing?
1
Randomly selected Schools vs. Students - difference in “significant” comparisons
2
what test to use for comparing count data across multiple groups
1
Should I use non-parametric tests?