How to visualize compatibility between different versions of different software?

Here's an example of the sort of data that describes the compatibility:

I want to create a visualization to represent this compatibility. The most important features of this visualization are that it should, ideally, fit on a single page (maybe it would have to be a big page) and be optimized for answering the question "I have this version of product X. Which versions of the other products can I use?"

A "compatibility matrix". Each row would represent every version of each 5 products (it would be quite a lot of rows). Each column would just represent a product. Each cell would then contain a range, indicating the versions of the column product that are compatible with the version of product on the current row. The problem with this is that it would be very long and there would be lots of duplicated information (it's not taking advantage of the fact that all compatibility is reciprocated). There's also wasted space from rows for product X version Y.Z and columns for product X (there's no need to communicate which versions of product X are compatible with themselves as that makes no sense).

Another option I considered is a "compatibility bar graph" something like the following: 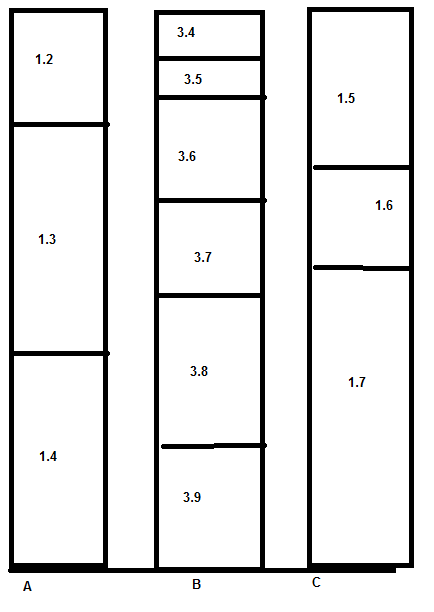 In this instance, you would just draw a horizontal line at some point and the boxes intersected by that line would describe a set of compatible versions of all products. I think this would be very difficult to create because I'd need to figure out how tall each box will need to be and make sure there's enough space to accommodate all the other compatible versions of the other products and make sure all the overlapping is correct. I also don't even know if it would work - maybe there's some instance where it wouldn't be able to accurately represent some valid combination (but I haven't discovered such a case yet). 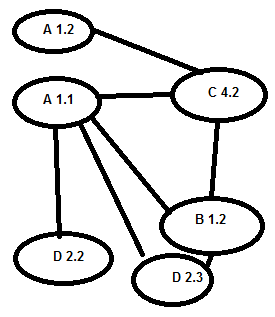 As you can probably tell, this seems like kind of a nightmare to create. I would want to lay it out to avoid crossing any lines, but I'm not even sure that's feasible. Also it would just be horrendously busy because there would be so many lines and so many points (one point for each version of each product).

With that in mind, I'm wondering if there is any option I haven't considered for representing something like this. Thanks for any suggestions!

Given the end goal of simple lookup conditional on a specific version of a specific product, a table may be suitable. Graphs are good to finding patterns, but tables are better for finding exact values.

Here is a quick and dirty mock-up in an ascii table that I think would be alright for the job. Here you would just have different tables given a different starting software product.

Graphs are good though for seeing patterns, so a set of graphs may be useful in helping customers choose which software best suits there needs given the compatibility constraints. Here is a simple paneled scatterplot approach, with the A version of the software on the Y axis, and different panels show different software version compatibility pairs.

I bet you could make a fairly nice planar (i.e. few lines crossing) network diagram to depict it using an irregular layout (if you have products cluster with one another and then lines between the clusters), but the scatterplot is easier to whip up in a few minutes, and organizing the panels I imagine will do just as good a job as a network diagram.

Not the answer you're looking for? Browse other questions tagged categorical-data data-visualization or ask your own question.

2
Compare two Medians
4
How to meaningfully visualize a categorized, weighted data set
2
Best way to visualize data with two keys and many rows in R (heatmap, mosaic plot, treemap, ggplot)
3
What kind of chart can visualize individual points of data on a single axis?
0
Choice combination, which type of analyses?
1
How to visualize separate categories that share common features with radar charts?
1
Grouping and visualizing values from data set with multiple variables
5
How to visualize distance vs. distance vs. size?