Given a series of numbers, generate new numbers that are “similar” to the original numbers

I'm a programmer but I don't know much about stats, so please excuse me if this question sounds naive.

I have two computers that are in different locations. I have made N measurements for the network distance between them. So it's essentially a series of N numbers like 200ms, 173ms, 212ms....

Now, I need to write a simulator that simulates these two computers. What I need is a generator that can generate new network distances between them. So for instance, if the generator generates something like 183ms, then it'd be reasonable. But if it generates, say, 1 billion ms, then that wouldn't make sense since it deviates so much from the original data set.

So how would I generate new numbers that are similar to the numbers in the original series?

P.S. I'm not sure what tags I should use for this question because I don't know much about stats... feel free to add tags that you think are more appropriate.

a) The most obvious thing to do is

b) If you want different numbers to the ones you already have, you could: 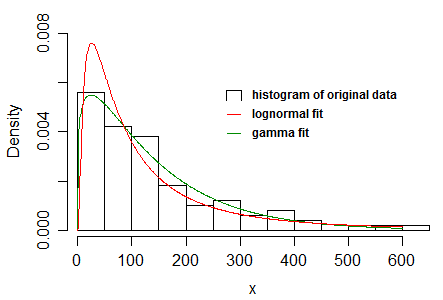 c) If resampling makes sense to you but you still want different numbers to your original sample, you might 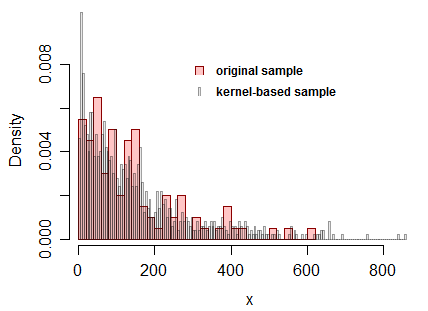 This was generated by

You could just resample.

This approach makes no distributional assumptions -- i.e. you aren't assuming the distances are normal, or exponential or some other distribution.

Not the answer you're looking for? Browse other questions tagged sampling random-generation or ask your own question.