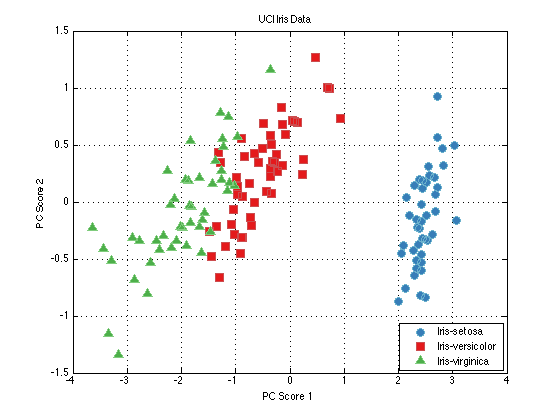 Can a human manually cluster the Iris dataset? For our convenience, let us consider it as a two dimensional dataset. By which means and how a human would cluster the dataset?

Certainly, humans can cluster data sets, but those of limited size and complexity. In fact, we do that all the time in our everyday life. For (a very simple) example, when we stay on a busy street and want to hire a taxi cab, we look around and perform visual clustering of all nearby vehicles that we think are taxi or might be taxi. We can come up with a large number of similar examples, but I'm sure that you get the idea.

How do humans perform manual clustering, for example, of taxi cabs? I think that one, and a rather simplified, answer is this: by comparing certain attributes of [objects] vehicles around (such as special marking or color, sign on the roof, presence on a specially designated location) with our mental associations for a taxi cab (along the above-mentioned attributes). Those attributes are usually referred to as dimensions in statistics, data science, machine learning and other fields. The same principles apply to Iris data or any other data sets that are feasible to be clustered manually. I hope that my explanation is clear enough and close to what you've expected.

UPDATE per comments [my thoughts on relation between human clustering and statistical models and clustering algorithms - note that I'm not a cognitive scientist, so take them with a grain of salt]:

Then what are the clustering algorithms that are closest to the human clustering or how humans would cluster the dataset? – Parashara

I think that it all very much depends on what level and from what perspective you want to analyze the phenomenon (of human clustering). For example, from the application (functional) and/or statistical perspectives, I would say that human clustering resemble decision trees or, more accurately, random forest algorithms and, perhaps, some Bayesian approaches, such as hidden Markov model and its cousin hierarchical hidden Markov model. From a structural physiological perspective, I would place human clustering in a neural networks category, for obvious reasons. From a comprehensive approach perspective, most likely, the best (or one of the best) category for the human clustering is hierarchical temporal memory model, which is based on a combination of Bayesian models, spacial and temporal clustering and neural networks. I hope it makes sense.

Herman Chernoff invented long ago Chernoff faces which address precisely your problem. He observed that humans are particularly able to tell apart other people looking at their faces, and proposed to code up to 18 variables (as I recall) in a single face.

In his original JASA 1973 paper he shows an example in which a human can do a very good job at classifying fossils just by looking at those faces.

Not the answer you're looking for? Browse other questions tagged clustering algorithms or ask your own question.

4
How do I cluster data where some observation can not be in the same cluster?
3
Hybrid (K-means + Hierarchical ) clustering
1
How to re-cluster new instance in centroid base clustering?
3
Ascertaining what clustering algorithm to use in various situations
0
Using centroids to find predictive cluster features
3
How to assign existing cluster numbers for future data, using hierarchical clustering algorithms?
1
How can I cluster data drawn from distributions with known symmetries?
0
Suggestions to cluster more than 300k observations
1
K-Means clustering: optimal clusters for common data sets