how to determine skewness from histogram with outliers?

By observing the graph itself, it seems that it is negatively skewed. However, mean (58.08) > median (57.7). Does this mean that it is positively skewed, or fairly symmetric?

Any helpful answer will be highly appreciated :D 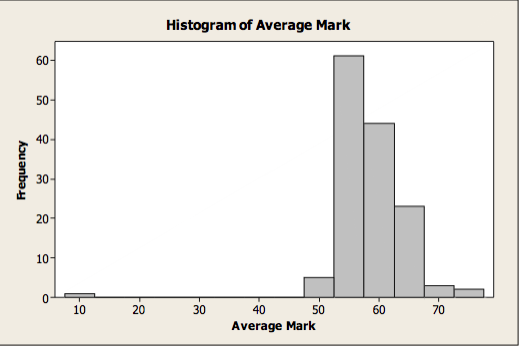 Skewness isn't a well-defined thing; it's a relatively vague notion, one that there have been numerous attempts to give specific definitions of. The different definitions are not necessarily consistent with each other. For example moment skewness might suggest the opposite direction to second Pearson skewness, (a measure based on mean minus median).

Assessing skewness from a histogram

This is also tricky.

[Unfortunately, stats packages tend to base their bin widths off certain optimal formulae, but the thing they optimize is not especially suited for vidually judging the shape and identifying fine detail. Our eyes can smooth roughness, and default histograms tend to be much too smooth for such purposes. I typically increase the number of bins by a factor of 2 or often much more.]

See this answer assessing approximate distribution of data based on a histogram which discusses some of the issues, but I'll give some highlights here -

The difference between these two histograms boils down to a simple change of bin origin:

And the difference between these two is a change of binwidth (and origin):

That is, the same data can look quite different, depending on how you set up your plot. For more details and advice, see the above-linked answer.

Looking at your plot

I think most people might say something more like the first, but it's just a guess. The last one is a pretty safe assessment, but it's not especially helpful.

Not the answer you're looking for? Browse other questions tagged outliers skewness histogram minitab symmetry or ask your own question.

113
Assessing approximate distribution of data based on a histogram
31
Outlier Detection on skewed Distributions
10
Taming of the skew… Why are there so many skew functions?
1
Discrete data: Graphs and skewness

8
Median + MAD for skewed data
26
Real life examples of distributions with negative skewness
19
How to assess skewness from a boxplot?
23
How to tell if my data distribution is symmetric?
1
What do I fit to a heavily positively skewed histogram?
2
Central Tendency for Negatively Skewed Data
1
How do I know which way this sample is skewed?