Is a spike-and-slab prior a proper prior?

Is a spike and slab prior a proper prior?

If not, does it still lead to a proper posterior?

First let's look at Mitchell and Beauchamp (1988)[1], for a description of what a spike-and-slab prior is:

That is, $\beta_j$ is uniformly distributed between the two limits $-f_j$ and $f_j$, except for a bit of probability mass concentrated at 0 if $x_j$ is vulnerable to deletion. We are interested in taking $f_j$ to be very large for all $j$, ...

Now if $f_j$ is large-but-finite, this is a proper prior - we can even write down the cdf explicitly. 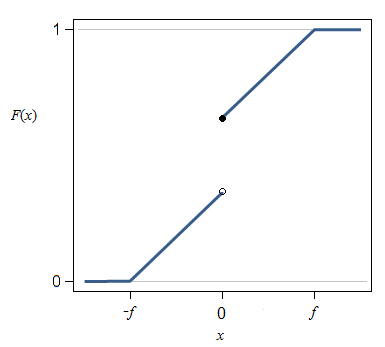 (You'll sometimes see people actually draw something like this:

- which might help with picturing it in some sense, but the problem with that is what then does the y-axis represent? It can't be density because the spike represents probability, and it can't be probability because the uniform part represents density. The two parts are on completely different scales. This seems to encourage the mistaken notion of conflating probability and density.)

Mitchell and Beauchamp keep $f_j$ finite but assume that it's large enough that the relevant integrals from $-f_j$ to $f_j$ can be well approximated by integrals from $-\infty$ to $\infty$.

If, however, we take the limit as $f_j\to\infty$ then of course it wouldn't be a proper prior. When being used as a prior for variable selection this generally isn't going to be done because of the way that impacts variable selection (try it for a simple case).

Other priors have been given the name "spike and slab" since -- including the case with a Gaussian slab, as you mention. In that case, the prior is proper as long as the variance of the normal is finite.

Not the answer you're looking for? Browse other questions tagged bayesian mathematical-statistics prior or ask your own question.

3
Is there a default parameter choice for the spike-and-slab prior?
14
Bayesian lasso vs spike and slab
7
Meaning of proper prior
11
Bayesian spike and slab versus penalized methods
11
Can a proper prior and exponentiated likelihood lead to an improper posterior?