Manifold learning: does an embedding function need to be well behaving?

I am trying to learn about manifold learning techniques; a family of methods in machine learning. According to this idea, there is a low ($d$) dimensional, hidden space where the real data generation mechanism lies, which has $d$ degrees of variability. But we observe the data in a high ($m$) dimensional space where $m > d$. There is a function $f:\mathbb{R^d} \to \mathbb{R^m}$ which is called embedding function which takes the data from low dimensional hidden space and maps to the high dimensional observable one as $x_i = f(\tau_i) + \epsilon_i$, where $\epsilon_i$ is a noise term. The aim here is to learn about the function $f$. All of these ideas are summed up in the following slide: 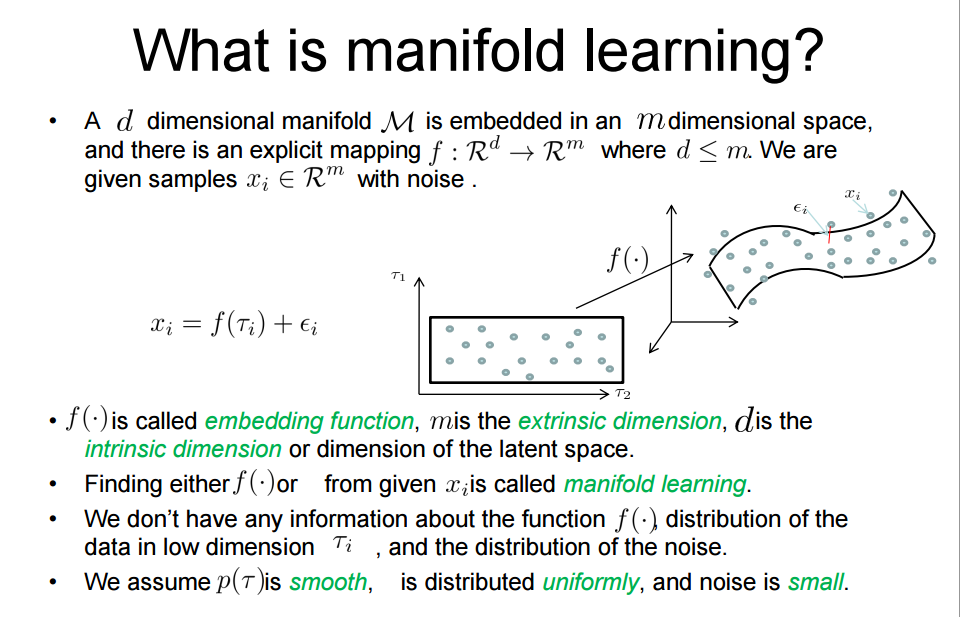 So is it just an assumption of the approach that this $f$ function is well behaving, in the sense that it maps a low dimensional space more or less to a manifold of the same dimension in a high dimensional observation space? Or is it a mathematical fact? How should I interpret this?

It is indeed an assumption that the function $f$ is "well behaving".

But if the function $f$ is smooth (i.e. it is continuous and has continuous derivatives of all orders; mathematicians write $f \in C^\infty$), then the image of $f$ will be a differentiable manifold of dimensionality $d$. I think this assumption is implicit in the figure you provided, because the image of $f$ is displayed there as a nice curly surface which is obviously supposed to be "smooth".

Perhaps it is enough that $f$ is continuously differentiable (i.e. $f \in C^1$), which is a weaker requirement (as it assumes nothing about higher derivatives).

Not the answer you're looking for? Browse other questions tagged machine-learning dimensionality-reduction manifold-learning or ask your own question.

11
What is the advantage of reducing dimensionality of predictors for the purposes of regression?
9
How to prove that the manifold assumption is correct?
4
Do word vectors obtained via word embedding techniques really form a vector space?
1
Which dimensionality reduction schemes are bijective?
12
Graphical intuition of statistics on a manifold
5
Is there an accepted method to determine an approximate dimension for manifold learning
7
Why does PCA often perform comparably well to nonlinear models on nonlinear problems?
4
What is embedding? (in the context of dimensionality reduction)