Estimate statistical significance of a feature in a time series

I have a set of time series with events marked in the middle. Following the event there is a temporary dip in the series values followed by a peak so that the area under the curve is 0.

This response is clearly visible in a plot of the average across all series, but the individual series are too noisy and varied to identify the response visually.

What is the best metric for estimating the statistical significance of this response? That is, how can I be sure it is not just a random artifact?

This is step-count data in response to the delivery of a brief intervention. Example: subject gets a text message suggesting going for a run.

Though this effect is not sinusoidal as described above and a bit more exaggerated than the case I'm describing above, here is a plot illustrating a bump response in the averaged signal: 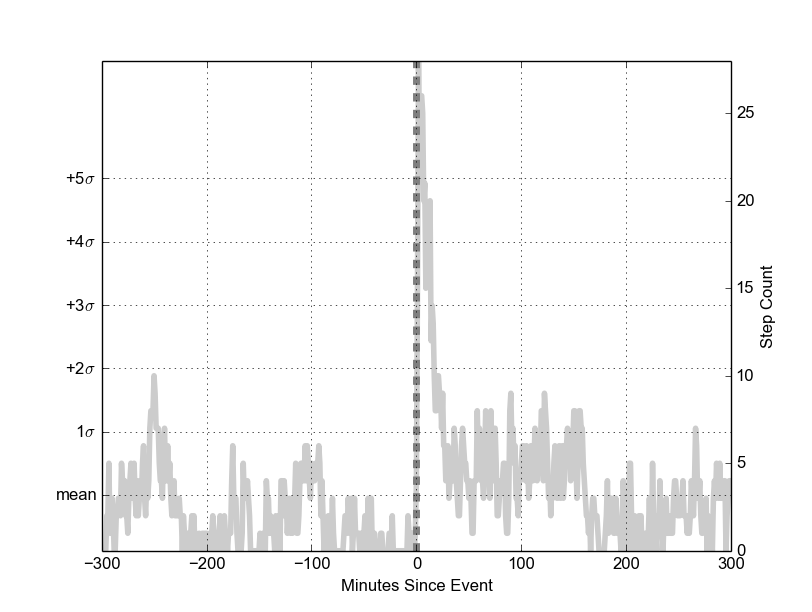 Based on your edit to the question, it appears that you have a pulse input and a rapid decline in your response and settles to a new level for a while. I would go with figure (e).

On a side note, Box is an amazing applied statistician and was able to think about a problem and visually present it in a highly readable paper (even non statistician like me could understand it) and could be applied to a problem even 50 years later. 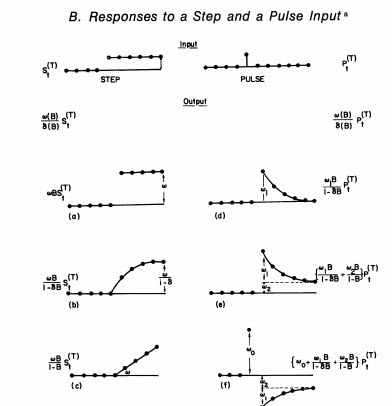 To evaluate the significance of the peak you have to formulate your a priori knowledge on the individual time series you are measuring as a null hypothesis. A likely null hypothesis would be that your time series have the amplitude and frequency spectrum that they have and are uncorrelated to each other (and thus should not exhibit any peaks when averaged).

In this case, you can make use of time-series surrogates to generate a dataset that complies with your null hypothesis per construction. In particular, every prominent peak in the average of these surrogate time series would be due to chance.

If your peak is as prominent as the one you showed in your example (and unless you have a priori knowledge of your time series that is highly beneficial for the generation of such peaks), this approach might be overkill though. Also, if you want to estimate a very low significance level, you need a lot of surrogate datasets and thus a lot of computing time.

Not the answer you're looking for? Browse other questions tagged time-series hypothesis-testing statistical-significance arima intervention-analysis or ask your own question.