What is the main difference between maximum likelihood estimation (MLE) vs. least squares estimaton (LSE) ?

Why can't we use MLE for predicting $y$ values in linear regression and vice versa?

Any help on this topic will be greatly appreciated.

What is the main difference between maximum likelihood estimation (MLE) vs. least squares estimation (LSE) ?

As @TrynnaDoStat commented, minimizing squared error is equivalent to maximizing the likelihood in this case. As said in Wikipedia,

In a linear model, if the errors belong to a normal distribution the least squares estimators are also the maximum likelihood estimators.

they can be viewed as almost the same in your case since the conditions of the least square methods are these four: 1) linearity; 2) linear normal residuals; 3) constant variability/homoscedasticity; 4) independence.

Maximizing L is equivalent to minimizing(since other stuff are all constants, homoscedasticity) $$\sum_{i=1}^n(y^{(i)}-w^TX^{(i)})^2.$$ That's the least-squares method, the difference between the expected $\hat{Y_i}$ and the actual $Y_i$.

Why can't we use MLE for predicting $y$ values in linear regression and vice versa?

ML is a higher set of estimators which includes least absolute deviations ($L_1$-Norm) and least squares ($L_2$-Norm). Under the hood of ML the estimators share a wide range of common properties like the (sadly) non-existent break point. In fact you can use the ML approach as a substitute to optimize a lot of things including OLS as long as you are aware what you're doing.

$L_2$-Norm goes back to C. F. Gauss and is around 200 years old while the modern ML approach goes back to (IMHO) Huber 1964. Many scientists are used to $L_2$-Norms and their equations. The theory is well understood and there are a lot of published papers which can be seen as useful extensions like:

Also there are huge number of specialized statistic tests for hypotheses. This does not necessary apply to all ML estimators or should be at least stated with a proof.

Another profane point is that $L_2$-Norm is very easy to implement, can be extended to Bayesian regularization or other algorithms like Levenberg-Marquard.

Not to forget: Performance. Not all least square cases like Gauss-Markov $\mathbf{X\beta}=\mathbf{L}+\mathbf{r}$ produce symmetric positive definite normal equations $(\mathbf{X}^{T}\mathbf{X})^{-1}$. Therefore I use a separate libraries for each $L_2$-Norm. It is possible to perform special optimizations for this certain case.

Feel free to ask for details.

Let's derive the equivalence through the Bayesian/PGM approach.

Here is the Bayesian network of linear regression: 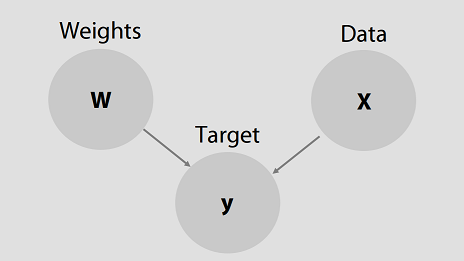 We can factorize the joint distribution according to the above graph $\mathcal{G'}$:

Since maximum likelihood is a frequentist term and from the perspective of Bayesian inference a special case of maximum a posterior estimation that assumes a uniform prior distribution of the parameters. Then we just ignore $P(w)$.

Alone the same line in this answer we see that the least square method is equivalent to the meximum likelihood method in your case.

6
When would maximum likelihood estimates equal least squares estimates?
1
Is there any particular converging pattern for Least Square Estimators and Maximum Likelihood Estimators when we increasing the sample size?
1
Existence of least squares and maximum likelihood estimators?
2
LSE vs MLE - why use LSE when we have MLE?
0
Does "Ordinary Least Squares" (OLS) have any inherent relationship with "Maximum Likelihood Estimation" (MLE)?