My question is about understanding Figure 2.8 in The Elements of Statistical Learning (2nd edition). The topic of the section is how increasing dimension influence the bias/variance.

I can roughly understand Figure 2.7 in ESL, but have no idea about 2.8. Any explanation on the roughly unchanged bias, or the dominating variance? I cannot imagine how they change when the dimension is increasing.

Following is the detail:

The figure is below. The right plot is the case with increasing $p$ (dimension). 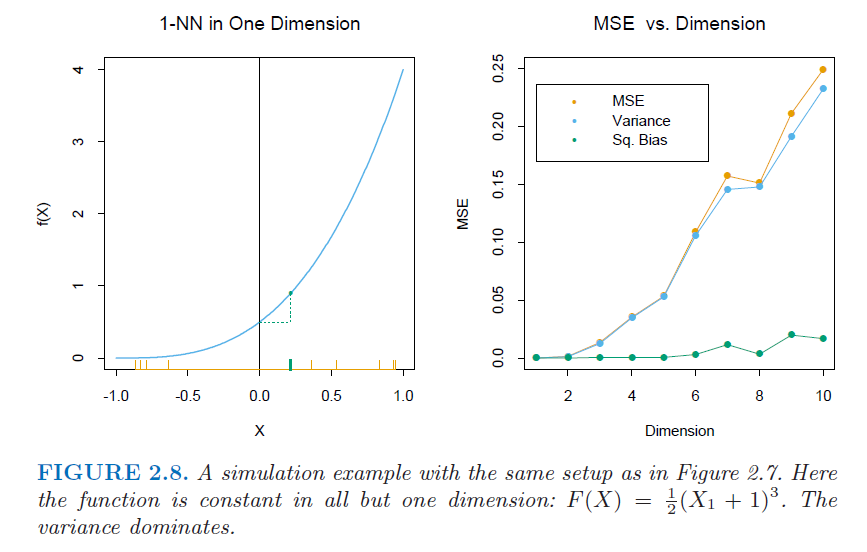 Hence, the presence of bias indicates something basically wrong with the model, whereas variance is also bad, but a model with high variance could at least predict well on average.

The key to understand examples generating Figures 2.7 and 2.8 is:

Recall the the target function of the example generating Figure 2.7 depends on $p$ variables, and hence the MSE error is largely due to the bias.

Conversely, in Figure 2.8 the target function of the example depends only on $1$ variable, and thus the variance dominates. More generally, this happens when you are dealing with low dimensions.

I hope this could help.

Well, I don't know whether it's appropriate to answer a question asked by myself... But I think I have a relatively intuitive answer and I just wanna share it.

As @stochazesthai said, the true function of 2.7 depends on all $p$ components and 2.8 only $1$ component. On the other hand, the 1-NN algorithm involves the ordinary norm (by default), so the distance is measured by all components. Another thing to mention is that the expectation is taken to the estimated target $\hat{y}$ over the sample distribution.

Now consider the input $X$. Given any distance $d$ to the origin, when $p=1$, there're only $2$ choices of the value of $X$, which are $d$ and $-d$. When $p$ is increasing, with any fixed distance, the choices of $X$ will be dramatically increased, where the value of the first component $X_1$ can be oscillating more and more freely.

Then consider the 1-NN. When $p$ is increasing, as @stochazesthai quoted, the nearest neighbor of origin will be far away with high probability, which means that the smallest $||X||$ will be large.

Hence for $f_1$ (where $||X||$ involved), $E(\hat{y}_0)$ will increase a lot when $p$ is increasing, so the bias will increase significantly; but at the same time $\hat{y}_0$ will also be large with high probability, so the variance will not increase too much.

On the other hand, for $f_2$ (where only $X_1$ involved), when $p$ is increasing, as I mentioned above, $X_1$ can oscillate more and more dramatically with the same distance $E_{\mathcal{T}}(\hat{y}_0)$. So the increasing of variance will dominate, but $E_{\mathcal{T}}(\hat{y}_0)$ itself will not change a lot, so the bias will roughly unchanged in comparing with variance.

Hopefully it's kind of helpful.

Not the answer you're looking for? Browse other questions tagged variance bias k-nearest-neighbour or ask your own question.

12
What is meant by the variance of *functions* in *Introduction to Statistical Learning*?
1
Can increasing the training data reduce bias
4
Bias and variance in KNN and decision trees
1
Why does increasing K increase bias and reduce variance