PDF of a sum of dependent variables

I don't see any useful change of variables. I thought about using conditional probability, but how can I find $f(\sqrt{X^2+W}\Big|X)$? I might be too much ahead and maybe have to go back a few steps.

Is it even possible to calculate something like this? 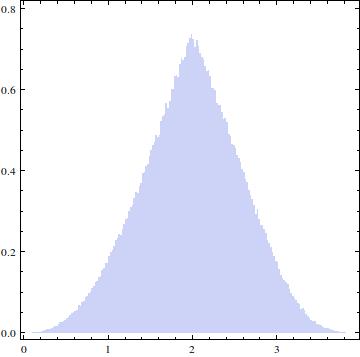 EDIT: The accepted answer gives the solution I was looking for, however, I'm still curious how to derive it analytically. I mean, in my previous question the CDF was given as an integral:

with $F$ and $g$ given by simple functions. Theoretically, that could be integrated using pen and paper. Of course using software is natural. However, I'm still curious how to give a closed-form answer here. wolfies answer rings a bell, but... A convolution of three pdfs of such a (relatively) complicated function?

This reduces the problem from 4 to 3 independent random variables. Then, by independence, the joint pdf of $(A,D,U)$ is $f(a,d,u)$:

where I am using the Prob function from the mathStatica package for Mathematica to automate the nitty-gritties.

The pdf of $Z$ is simply the derivative of the latter wrt $z$, which yields the solution:

Here is a plot of the exact theoretical pdf of $Z$: 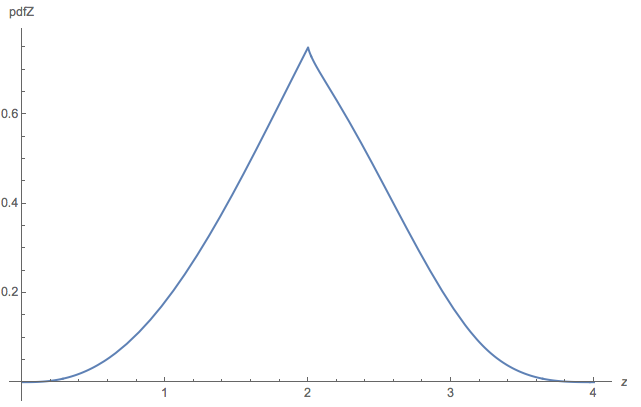 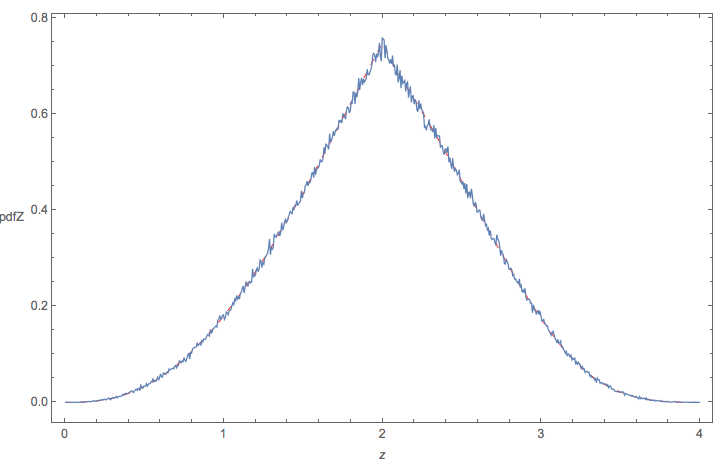 Just after reading wolfies answer I understood I could calculate the final distribution from the very beginning without all the mid-point steps: 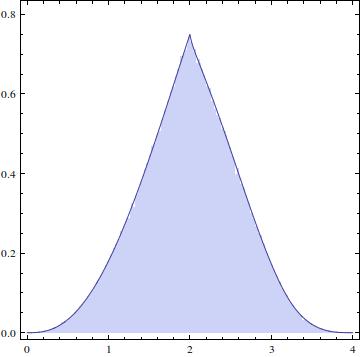 This uses directly the approach of an answer to my previous question.

Not the answer you're looking for? Browse other questions tagged distributions random-variable pdf uniform mathematica or ask your own question.

17
What's the distribution of $(a-d)^2+4bc$, where $a,b,c,d$ are uniform distributions?
4
PDF of dependent variables
1
Is the sum of two independent non-overlapping uniforms uniform?
33
Brain-teaser: What is the expected length of an iid sequence that is monotonically increasing when drawn from a uniform [0,1] distribution?
2
Calculating the sum of dependent uniform random variables
1
Recursive convolution of a PDF with itself