Conclusions from output of a principal component analysis

I am trying to understand output of principal component analysis performed as follows:

I tend to conclude following from above output:

Am I right about above conclusions?

Edit regarding question 5: I want to show all rotation in a simple barchart as follows: 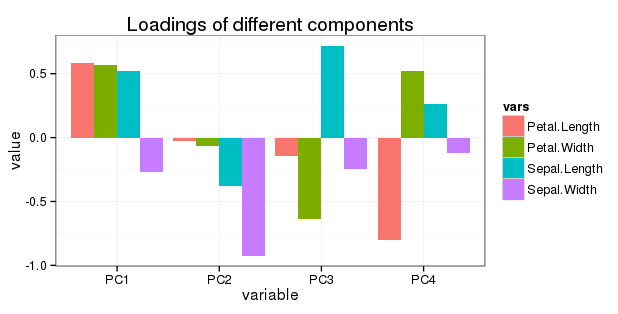 Since PC2, PC3 and PC4 have progressively lesser contribution to variation, will it make sense to adjust (reduce) the loadings of the variables there?

Not the answer you're looking for? Browse other questions tagged r pca interpretation or ask your own question.

85
Loadings vs eigenvectors in PCA: when to use one or another?
19
Positioning the arrows on a PCA biplot
0
Does biplot() function in R use rotations or loadings to plot arrows?

12
How to use principal components analysis to select variables for regression?
16
Which variables explain which PCA components, and vice versa?
1
Problem with PCA in R (suspiciously high explained variance)
6
How to identify variables with significant loadings in PCA?
2
Can I use PCA to study how variables affect each other?
1
Kmeans clustering results on pca dataset reduction
3
How to interpret the loadings of the *second* principal component?
0
What is the contribution of base variables to principal components (PCA) after rotation?