Coefficient of Determination ($r^2$): I have never fully grasped the interpretation

I want to fully grasp the notion of $r^2$ describing the amount of variation between variables. Every web explanation is a bit mechanical and obtuse. I want to "get" the concept, not just mechanically use the numbers.

Start with the basic idea of variation. Your beginning model is the sum of the squared deviations from the mean. The R^2 value is the proportion of that variation that is accounted for by using an alternative model. For example, R-squared tells you how much of the variation in Y you can get rid of by summing up the squared distances from a regression line, rather than the mean.

I think this is made perfectly clear if we think about the simple regression problem plotted out. Consider a typical scatterplot where you have a predictor X along the horizontal axis and a response Y along the vertical axis.

The mean is a horizontal line on the plot where Y is constant. The total variation in Y is the sum of squared differences between the mean of Y and each individual data point. It's the distance between the mean line and every individual point squared and added up. 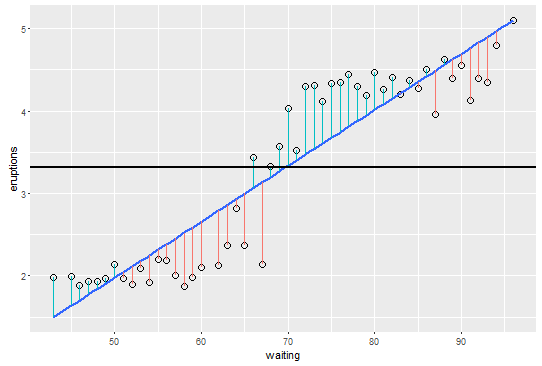 A mathematical demonstration of the relationship between the two is here: Pearson's correlation and least squares regression analysis.

I am not sure if there is a geometric or any other intuition that can be offered apart from the math but if I can think of one I will update this answer.

Consider the situation when we have two observations from the above data generating process given by the pairs ($y_1,y_2$) and ($x_1,x_2$). We can view them as vectors in two-dimensional space as shown in the figure below:

Thus, in terms of the above geometry, our goal is to find a $\beta$ such that the vector $x\ \beta$ is the closest possible to the vector $y$. Note that different choices of $\beta$ scale $x$ appropriately. Let $\hat{\beta}$ be the value of $\beta$ that is our best possible approximation of $y$ and denote $\hat{y} = x\ \hat{\beta}$. Thus,

From a geometrical perspective we have three vectors. $y$, $\hat{y}$ and $\hat{\epsilon}$. A little thought suggests that we must choose $\hat{\beta}$ such that three vectors look like the one below: alt text http://a.imageshack.us/img19/9524/intuitionlinearregressi.png

By the Pythagorean theorem, we have:

Therefore, the proportion of the variance explained by $x$ is $\frac{\hat{y}^2}{y^2}$. Notice also that $cos(\theta) = \frac{\hat{y}}{y}$. and the wiki tells us that the geometrical interpretation of correlation is that correlation equals the cosine of the angle between the mean-centered vectors.

Therefore, we have the required relationship:

(Correlation)2 = Proportion of variation in $y$ explained by $x$.

The Regression By Eye applet could be of use if you're trying to develop some intuition.

It lets you generate data then guess a value for R, which you can then compare with the actual value.

Not the answer you're looking for? Browse other questions tagged regression correlation variance or ask your own question.

0
How to interpret the R2 in univariate regression analysis?
26
Why is $SST=SSE + SSR$? (One variable linear regression)
17
Why squaring $R$ gives explained variance?
14
Sparsity by discarding least squares' coefficient
6
scikit-learn score metric on the coefficient of determination $R^2$
4
Standard deviation of error in simple linear regression
4
Geometrical interpretation of correlation of a variable and the residual
1
Sum of Squares reference resources