Confidence intervals from the Holm-Bonferroni test?

I'm a newcomer in the problem of multiple comparisons. I wonder how to calculate confidence intervals for Holm-Bonferroni method?

I know that for Bonferroni method we can just change the confidence level from $1-\alpha$ to $1-\frac{\alpha}{m}$.

Does this method also work for Holm-Bonferroni?

$\bf{Edit}:$ It seems that H-B method doesn't provide a procedure to correct the conf. interval. But would you comment on can I use one method for p-value correction and the other method for interval correction?

[This answer is completely rewritten from yesterday.]

I've found two papers that explain how to compute such confidence intervals, but they differ. 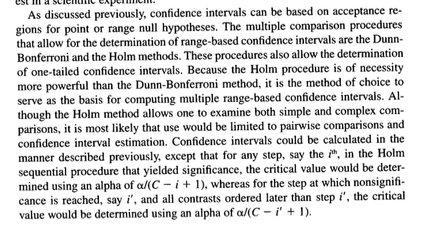 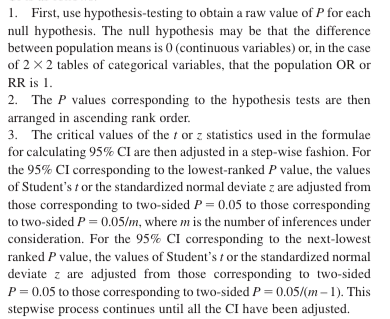 Both methods use the Bonferroni approach, but could be easily adjusted to the Sidak approach.

Any thoughts on which method is correct/better?

Not the answer you're looking for? Browse other questions tagged multiple-comparisons bonferroni or ask your own question.