Significance of intercept (as portrayed via an R formula)

I'm new to statistics in general (but a very seasoned developer). I'm trying to grasp why it seems like there's a lot of consideration given to intercepts, at least where it comes to models.

For example, the formulas below were taken from here:

Whether you omit the intercept terms or set them to 0, -1, etc.., it's just a superficial adjustment, right? In the end, does the intercept have no more importance than to just represent a vertical translation of the model?

Representing vertical translation is important. In a regression setting, the intercept is the expected value of the response variable when all features are 0. Omitting the intercept when the intercept is not truly 0 also has the effect of causing incorrect estimation of the remaining regression. I constructed the following example to illustrate.

In this case, we know the true model is $y=5+x+\epsilon$, but if we estimate the model without the intercept, the regression line is nowhere near the data! 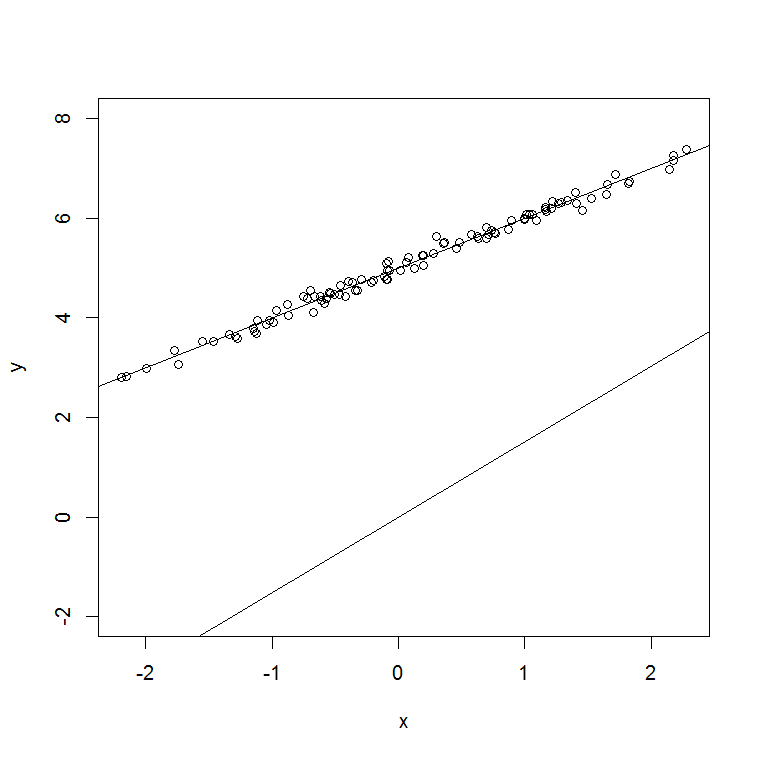 We can also see that the estimates of the coefficient of $x$ are incorrect. The correctly-specified model estimates $x$ very close to 1, while the model omitting the intercept is not at all close to 1. It's hard to discern the effect in the graph, though.

You're correct that in most cases you won't know the value of the intercept ahead of time. In general, the problems associated with omitting a feature is called "omitted variable bias." If the true model had two features $x_1$ and $x_2$, but we omitted one of them in the model, we would similarly have incorrect estimates of the remaining parameters.

You can look at the confidence interval of the estimate to get a sense of how strongly the data support the hypothesis of a nonzero intercept.

If all variables are transformed by subtracting their mean values, this effectively eliminates the need to estimate an intercept term, because the expectation of $y$ must be $0$ when all the features are also $0$. This comes at the cost of interpretability, though, since you'll be working on a new "scale." For example, if $x$ is temperature in Celsius, the $0$-mean temperature variable $x^\prime$ has moved the zero point to be the mean value of the data, so all of the nice properties about the location of the freezing point of water and so on move along with it. Whether this loss in direct, obvious interpretation is important to you depends on the particular application, of course.

Not the answer you're looking for? Browse other questions tagged r linear-model intercept or ask your own question.

0
Is the constant value ignorable?