I have a question about the consequences of using non-linear regression when the data violate the assumptions of (1) homoscedasticity and (2) normal distribution. Specifically, I am wondering about how it affects model comparison and the comparison of two data sets with one model. That is, how does it affect the validity and/or strength of those comparisons?

To give the question a little context, there are many instances in agronomy (my particular field) where the data are always heteroscedastic and non-normal--especially when they approach some sort of natural limit. It is nevertheless very common to see nonlinear regressions fit through these kind of data and then see subsequent model and/or data set comparison. 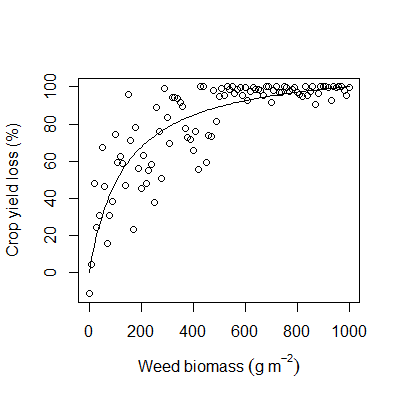 Issues of heteroscedasticity. The uncertainty is clearly and regularly related to the predictor value. As we increase weed biomass there is much more certainty in the crop yield loss values than there is at lower levels of weed biomass.

Issues of non-normality. Additionally, at the higher levels of weed biomass, where the crop yield loss approaches but cannot exceed 100%, the data is not distributed normally. Rather, it's something of a truncated normal distribution, where half of the distribution is missing (in this case, the half that would go above 100%).

So, what does this mean for further analysis in terms of model and/or data set comparison?

Can we proceed with these kinds of comparisons despite the data inherently and always violating two of the major assumptions of nonlinear regression? If not, why not and what might be an alternative approach to answering the aforementioned kind of research questions?

Just for reference, here is the code used to generate the figure.

The normality assumption is not necessary for nonlinear regression. It is often used because it's convenient. However, if it's clearly violated then I wouldn't use such an assumption at all. The same goes for homoscedasticity.

In your example the dependent variable seems to be confined between 0 and 100%. You could still use normal distributions and homoscedasticity if the data were "far" from the bounds. However, you show the sample where data spans all range, with substantial portion clustered by the borders. In this case neither homoscedasticity nor normality seems like reasonable assumptions.

0
Is assumption of residual normality and Homoscedasticity in nonlinear regression