Exploring a two-way interaction in multi-level regression, why do I get significant contrasts when the confidence intervals overlap on the graph?

I'm exploring a significant two-way interaction in a multi-level random-effects regression. The graph (below) appears to show the interaction is driven by differences at low X, and that at high X the moderator (V2) doesn't matter. Is there a reason why I get highly significant contrasts at high X when the confidence intervals appear to overlap?

Interaction graph (circles show where the reported contrast is being conducted): 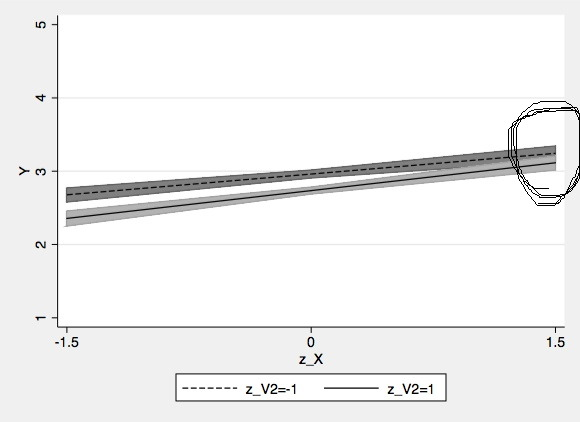 Contrast test at high X (circled on the graph):

That's surprising. Is this something to do with multi-level (nested/panel) data? I'm not very familiar with inferential stats using multiple levels simultaneously. I would have expected that if the 95% confidence intervals overlap, as they clearly do for z_X = 1.5, that the contrast there would be not significant or close to that. Thanks for reading.

The following are relevant posts, but I sadly admit I did not follow the explanations: Relation between confidence interval and testing statistical hypothesis for t-test

Large overlap between confidence intervals, although z test for difference was significant

I'm also new around here, so please let me know if I could improve how I asked this question.

The fact that the confidence intervals overlap does not mean that the difference is not significant, and this is true for all statistical models, including simple linear regression.

"Confidence intervals not overlapping" is substantial more conservative than the equivalent p value.

Interaction effects imply that your x variable on the graph has different effects depending on which of the two binary levels the subject falls into.

You are reading the graph correctly, and it implies that the binary variable has no effect at high values of x. However the fact that the two groups behave differently for low and high values of x is itself the definition of an interaction effect.

Not the answer you're looking for? Browse other questions tagged regression confidence-interval stata multilevel-analysis z-test or ask your own question.