Historically, Laplace originally considered the maximum observed error as a measure of the correctness of a model. He soon moved to considering MAD instead. Due to his inability to exact solving both situations, he soon considered the differential MSE. Himself and Gauss (seemingly concurrently) derived the normal equations, a closed-form solution for this problem. Nowadays, solving the MAD is relatively easy by means of linear programming. As it is well known, however, linear programming does not have a closed-form solution.

From an optimization perspective, both correspond to convex functions. However, MSE is differentiable, thus, allowing for gradient-based methods, much efficient than their non-differentiable counterpart. MAD is not differentiable at $x=0$.

A further theoretical reason is that, in a bayesian setting, when assuming uniform priors of the model parameters, MSE yields normal distributed errors, which has been taken as a proof of correctness of the method. Theorists like the normal distribution because they believed it is an empirical fact, while experimentals like it because they believe it a theoretical result.

A final reason of why MSE may have had the wide acceptance it has is that it is based on the euclidean distance (in fact it is a solution of the projection problem on an euclidean banach space) which is extremely intuitive given our geometrical reality.

As an alternative explanation, consider the following intuition:

When minimizing an error, we must decide how to penalize these errors. Indeed, the most straightforward approach to penalizing errors would be to use a linearly proportional penalty function. With such a function, each deviation from the mean is given a proportional corresponding error. Twice as far from the mean would therefore result in twice the penalty.

To give a visualisation of this, you can simply plot the penalty functions:

Now especially when considering the estimation of regressions (e.g. OLS), different penalty functions will yield different results. Using the linearly proportional penalty function, the regression will assign less weight to outliers than when using the squared proportional penalty function. The Median Absolute Deviation (MAD) is therefore known to be a more robust estimator. In general, it is therefore the case that a robust estimator fits most of the data points well but 'ignores' outliers. A least squares fit, in comparison, is pulled more towards the outliers. Here is a visualisation for comparison:

Now even though OLS is pretty much the standard, different penalty functions are most certainly in use as well. As an example, you can take a look at Matlab's robustfit function which allows you to choose a different penalty (also called 'weight') function for your regression. The penalty functions include andrews, bisquare, cauchy, fair, huber, logistic, ols, talwar and welsch. Their corresponding expressions can be found on the website as well.

I hope that helps you in getting a bit more intuition for penalty functions :)

If you have Matlab, I can recommend playing with Matlab's robustdemo, which was built specifically for the comparison of ordinary least squares to robust regression: 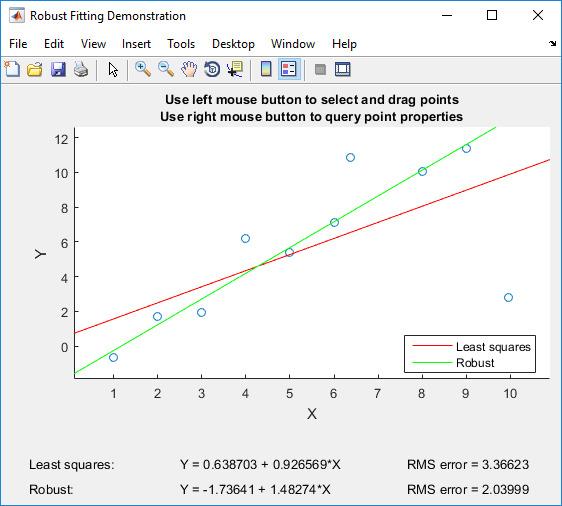 The demo allows you to drag individual points and immediately see the impact on both ordinary least squares and robust regression (which is perfect for teaching purposes!).

As another answer has explained, minimizing squared error is not the same as minimizing absolute error.

The reason minimizing squared error is preferred is because it prevents large errors better.

In theory you could use any kind of loss function. The absolute and the squared loss functions just happen to be the most popular and the most intuitive loss functions. According to this wikipedia entry,

A common example involves estimating "location." Under typical statistical assumptions, the mean or average is the statistic for estimating location that minimizes the expected loss experienced under the squared-error loss function, while the median is the estimator that minimizes expected loss experienced under the absolute-difference loss function. Still different estimators would be optimal under other, less common circumstances.

As also explained in the wikipedia entry, the choice of the loss functions depends on how do you value deviations from your targeted object. If all deviations are equally bad for you no matter their sign, then you could use the absolute loss function. If deviations become worse for you the farther away you are from the optimum and you don't care about whether the deviation is positive or negative, then the squared loss function is your easiest choice. But if none of the above definitions of loss fit your problem at hand, because e.g. small deviations are worse for you than big deviations, then you can choose a different loss function and try to solve the minimizing problem. However the statistical properties of your solution might be hard to assess.

Not the answer you're looking for? Browse other questions tagged least-squares error or ask your own question.

4
Why Standard Deviation is more popular than Mean Absolute Deviation?
521
Why square the difference instead of taking the absolute value in standard deviation?
30
Why is using squared error the standard when absolute error is more relevant to most problems?
25
Why do we usually choose to minimize the sum of square errors (SSE) when fitting a model?
14
Using the median for calculating Variance
13
Median Absolute Deviation vs Standard Deviation
8
Linear regression minimising MAD in sklearn
7
What is the maximum likelihood/GLM version of least absolute deviations for robust linear regression?
0
How does the assumption of a normaly distributed error lead to squared terms regarding the variance?

95
Mean absolute error OR root mean squared error?
9
Minimizing symmetric mean absolute percentage error (SMAPE)
0
Why do the residual sum of squares and the mean absolute percentage error conflict with each other?
6
Standard equivalent of OLS for minimizing the $L_1$ norm
3
With sum of squared error (SSE), how are larger errors are penalized more than smaller errors?
1
Better to Minimize Absolute Error or Sum of Squared Error?
1
Why is the error square equivalent to variance of error?