I am trying to implement a Neural Network to identify a Nonlinear System. I have implemented a very simple system in simulink and on the basis of examples of its input and output I would like to have the NN to mimic its behaviour. The system is the following 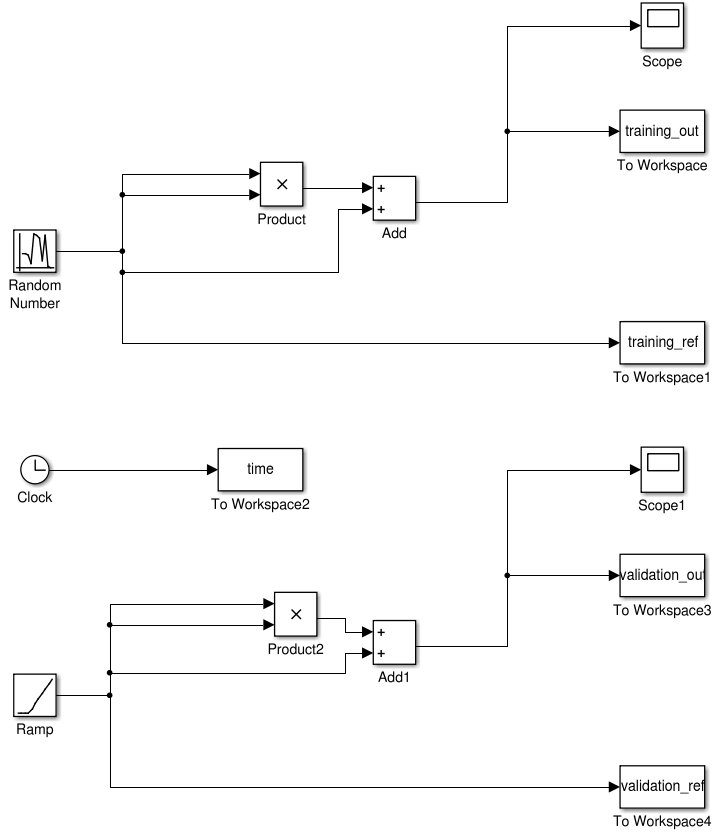 The schema on the top (the one with the random number as inputs) generates the training set, while the second one (with the ramp as input) is used to check whether the NN behaves properly. The network is a two layer network with a hidden layer of tanh nodes and a linear output layer. I have implemented two versions of the network, one in which stochastic gradient descent is used (update at each step) and another one in which the update is performed in batch. At the moment I am focusing on the iterative solution. I have also implemented the train-validate-test procedure described in this post.

Here the parameters of the network:

I use the 80% of the example set to train the NN, 10% to compute the error and the remaining 10% to produce the output you can see below. However, I cannot make the network generalize the system for different types of inputs.

What am I doing wrong? The full code can be found here

machine-learning neural-networks matlab
Share
Improve this question
edited May 23, 2017 at 12:39

It turned out that the problem was a normalization problem. In fact, I trained the Neural Network on a reference signal that was preprocessed and an output signal obtained with an unnormalized signal. This causes problems in case of nonlinear systems. Now I generate training outputs using a normalized inputs and everything works fine.

If anyone need more details, feel free to contact me

Not the answer you're looking for? Browse other questions tagged machine-learning neural-networks matlab or ask your own question.