What does the dashed bounds mean when plotting a contour plot with R GAM?

Does anybody have experiences with contour plots using R, specifically when fitting GAM?

which looks likes this: 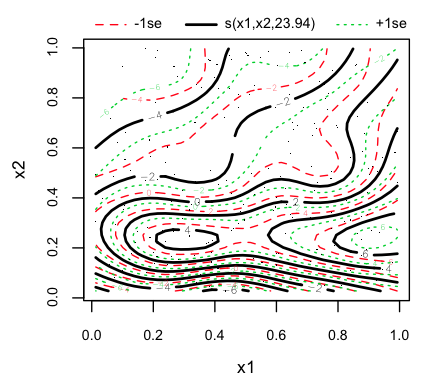 The generalized additive model produces a fitted surface defined by the black contours. The help file (from ?plot.gam) says:

...surfaces at +1 and -1 standard errors are contoured and overlayed on the contour plot for the estimate.

Not the answer you're looking for? Browse other questions tagged r regression nonparametric or ask your own question.

10
Different prediction plot from survival coxph and rms cph
5
Model validation after fitting a negative binomial GLM in R
18
What is the relationship between profile likelihood and confidence intervals?
4
Time series prediction: visualising path uncertainty region
1
Better way to fit/model data with high & low density areas (and with a geometric fit?)
3
Picking random regression lines from the distribution of OLS regressions
3
GAM: Why are confidence bands equal to zero when predicted value is zero?
0
Issues with posterior simulation from GAM