How should I interpret a Spearman's rank correlation significance of zero?

This is a follow up to a Stack Overflow question

The two vectors represent the frequency of terms in a different types of document. For example, one type might be a webpage and the other might be a newspaper article. So each vector is 1 by n where n is the number of of terms in my vocabulary. In this case, n=1500. The reason that I am calculating rank correlation is I want to be able to say whether the vocabulary distribution differs between the different types of document. I normalize each vector, so that the rank corresponds to the percentage of documents each vocabulary term appears in.

As I understand it, when p is small, the correlation is significant, but this is so extremely small that I am slightly concerned.

This is what my data distribution looks like on a loglog plot. 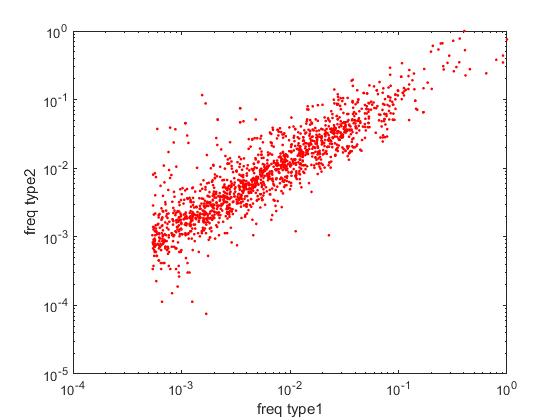 From the Matlab documentation for corr, the p-value for Spearman is computed using permutation distributions.

Therefore, to get a p-value of zero, I would need to get all of the correlation coefficients for the sampled permutations to either be greater than or all be less than T(obs). That seems extremely unlikely since my datapoints don't lie exactly on a line.

Am I correctly understanding the calculation? Is there an easier way to understand what the p-value is describing here?

Here is a link to the data on Dropbox, if you want to see if you get the same results.

The P value isn't zero. It is just very small and the program you use rounds it off to zero, rather than (correctly) saying it is less than some threshold.

The smallest normalized floating point number is this:

For Pearson correlation on your data, the p-value is computed using a large-sample approximation based on a t-statistic as follows:

For Spearman's, the t-statistic and p-value are

So, unless there is a bug, the p-value is not zero but is smaller than double-precision numbers can represent. Even denormal values smaller than realmin don't go this small.

Not the answer you're looking for? Browse other questions tagged p-value spearman-rho or ask your own question.