Which is the best visualization for contingency tables?

Which is best plot, from statistical standpoint, to show a contingency table, which is typically being analyzed by chi-square test? Is it a dodged barplot, stacked barplot, heatmap, contour plot, jitterred scatterplot, multiple lines plot or something else? Should one show absolute values or percentages?

Edit: Or as @forecaster suggests in the comments, the table of numbers is itself a simple plot and should be sufficient.

There isn't going to be a one-size-fits-all solution here. If you have a very simple table (e.g., $2\times 2$), simply presenting the table is probably best. If you want an actual figure, mosaic plots (as @xan suggests) are probably a nice place to start. There are some other options that are analogous to mosaic plots, including sieve plots, association plots, and dynamic pressure plots (see my question here: Alternative to sieve / mosaic plots for contingency tables); Michael Friendly's book, Visualizing Categorical Data, would be a good (SAS-based) resource for this topic and the vcd package is a good resource for implementing those ideas in R.

As tables have larger numbers of rows and columns, however, these become harder to use, in my opinion. A different type of visualization option is to perform / plot a correspondence analysis. A correspondence analysis is analogous to running a principal components analysis on both the rows and the columns of the contingency table. Then both are plotted together with a biplot. Here is an R based example using the data from @xan's answer: 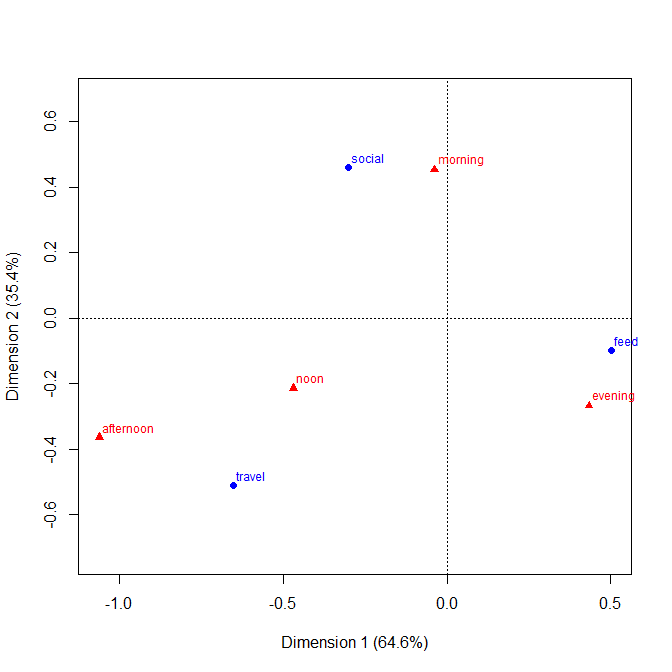 In R there is the ca package; this vignette (pdf) may be helpful as well.

Different visuals will be better at highlighting different features, but Mosaic plots work well for a general view (checking to see if anything stands out). Maybe that's what you meant by dodged bar plot. Like most options, they're not symmetric in that they represent relative frequencies better in one dimension than the other. A nice feature is that the marginal frequencies are also represented. 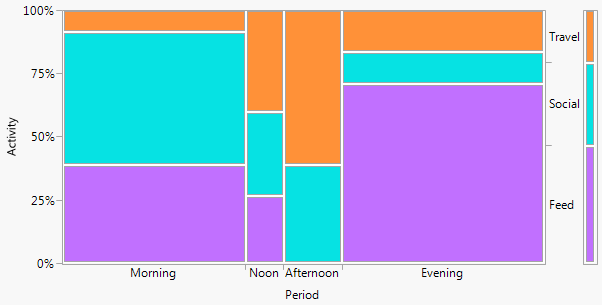 I agree that the "best" plot doesn't exist independent of dataset, readership and purpose. For two measured variables, scatter plots are arguably the design that leaves all others in its wake, except for specific purposes, but no such market leader is evident for categorical data.

My aim here is just to mention a simple method, often re-discovered or re-invented, but nevertheless also often overlooked even in monographs or textbooks covering statistical graphics.

Example first, covering the same data as posted by xan: 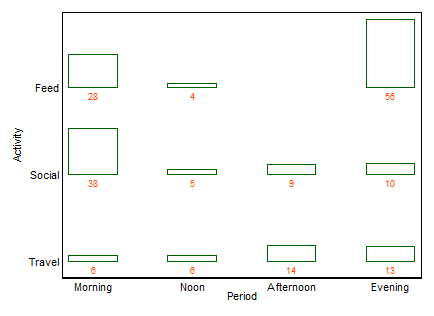 If a name is wanted, as it often is, this is a twoway barchart (in this case). I will not catalogue other terms here, except that multiple barchart is one common alternative with similar flavour. (My small objection to "multiple barchart" is that "multiple" does not rule out the very common stacked or side-by-side bar charts, whereas "twoway" to me more clearly implies a row and column layout, although in turn it may take examples to make that clear.)

Pluses and minuses for this kind of plot are also simple, but I will spell some out. As I am fond of this design (which goes back at least to the 1930s), others may want to add sharper criticisms.

+1. The idea is easily understood, even by non-technical groups. Bar heights or bar lengths encode frequencies in this example. In other examples, they could encode percents calculated any way you like, residuals, etc.

+2. The row-and-column structure matches that of a table. You can add numerical values too. Very small amounts and even implicit zeros are clearly evident, which is not always the case with other designs (e.g. stacked bar charts, mosaic plots). Row and column labelling is usually more efficient than adding a key or legend, with the mental "back and forth" that that requires. Thus this design hybridizes graph and table ideas, which seemingly troubles some readers; conversely, I would argue that strong distinctions between Figures and Tables are just historical hang-overs, obsolete now that researchers can prepare their own documents and do not have to rely on designers, compositors and printers.

+4. The design clearly allows ordinal variables on either axis. Order can be expressed (e.g.) by appropriate shading as well as the order of categories on that axis. Category order on axes can be determined by their meaning, or better determined by frequencies; alphabetical order according to text labels may be a default, but should never be the only choice considered.

-1. By being general in design the plot can be less efficient in showing certain kinds of relationships. In particular, a mosaic plot can make departures from independence very clear. Conversely, when relationships between categorical variables are complicated or unclear, then typically no graph is good at showing more than that weak fact.

-2. In some ways the design is inefficient in use of space by leaving room for every cross-combination regardless of whether or how frequently it occurs. This is the vice of the same principle considered as a virtue. The particular design above spaces categories equally regardless of their frequency; sacrificing that often sacrifices readable marginal labels, which I value very highly. In this example, the text labels happen all to be very short, but that is far from typical.

Note: xan's data appear just to be invented, so I won't try an interpretation any more than is attempted in other answers. But some homespun wisdom deserves the last word here: the best design for you is one that best conveys to you and your readers the structure of some real data that you care about.

EDIT The general idea, and a Stata implementation, are now written up in this paper.

To complement @gung's and @xan's answers, here's an example of mosaic and association plots using vcd in R.

To obtain the plots: 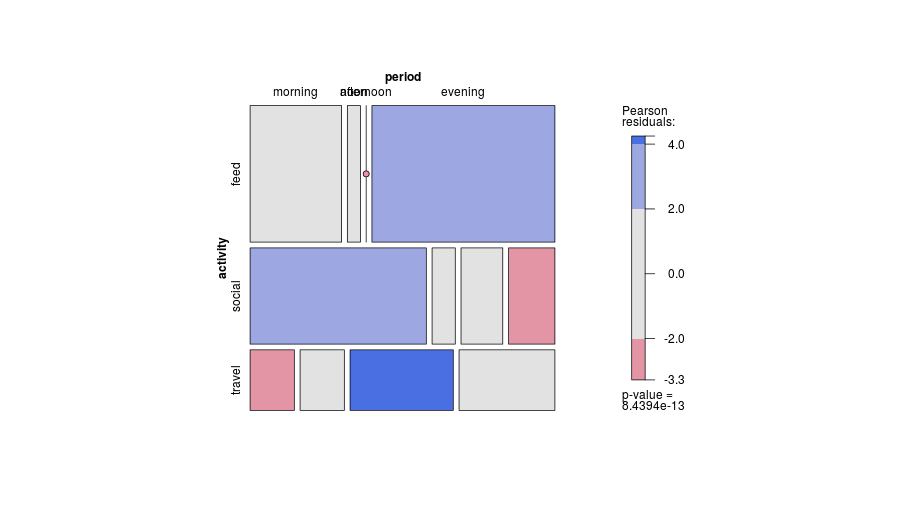 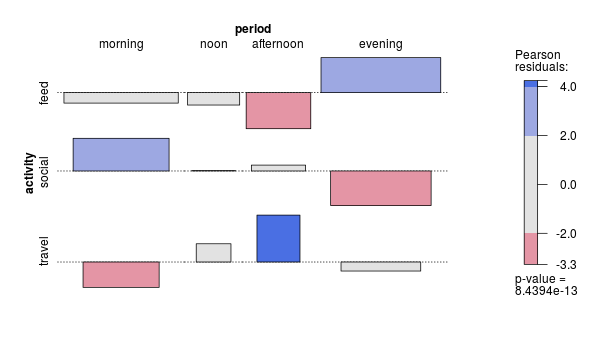 Both intuitively present departures from expected frequencies... The default is the model of mutual independence, but it can be changed (e.g. to joint independence if there is a clear response variable) via the expected argument.

One idea that is sometimes useful, especially for somewhat large tables, is to reorder rows/columns to make any structure clearer. One way to do the reordering is to use the sort order of the correspondence analysis row/column scores (on the first eigenvalue). I will show this by an example, in R:

Then we do the simple correspondence analysis, reorder, and some simplification of names to allow the table to fit on a page:

To help the reading, a table of names with abbreviated names:

The group "Other" seems strange, with uniformly lower interest in hobbies than all the others! And look at "Fishing", the groups with a high general interest in hobbies have a low interest, while it for "Manual labourer" and "Unskilled worker" scores the highest. Is this as easy to see in the original table?

Not the answer you're looking for? Browse other questions tagged data-visualization contingency-tables or ask your own question.

0
Best Graph for Comparing Data with a Nominal DV and Nominal IV?
58
Graph for relationship between two ordinal variables
24
How can you visualize the relationship between 3 categorical variables?
17
Alternative to sieve / mosaic plots for contingency tables
6
How to interpret a two-dimensional contingency table?
4
Chart suggestions for data flow
2
Visualise clusters and relationship with features; alternative to chord diagram
2
Residuals colors of the mosaic plot are all dark. Implies?
2
Using phi as a measure of correlation for categorical analysis
2
Displaying nominal data with a line graph
See more linked questions