Suppose I have a data set of 200 controls (group A; has no memory problems) and 100 cases (group B; has memory problems). And I'm looking at the relationship between memory and cognitive test score (low = good memory; high = bad memory). When I perform a 2 sample t-test, I find that group B scores significantly higher on the cognitive tests than group A. This is expected, as group B has poorer memory than its counterpart. 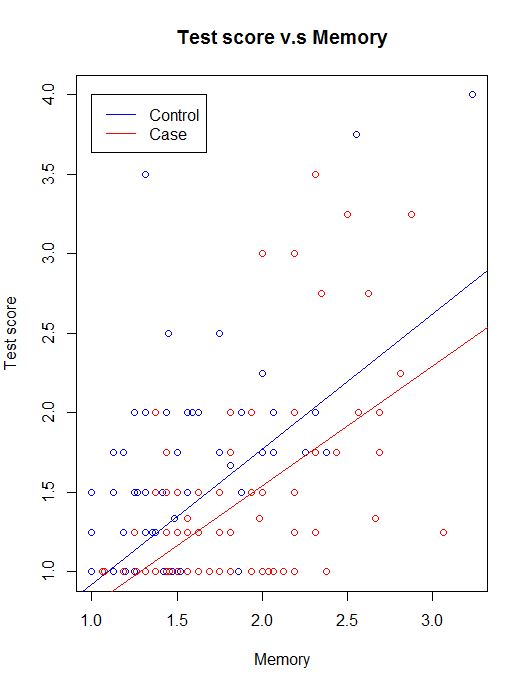 Since you have 6 variables, you may be facing the multicollinearity.

If the variables are highly correlated, your interpretation is never unambiguous. For example, the main risk of belonging to group B can be explained by another variable that is highly correlated with "Score" and the "Score" itself may only give small correction to this. Please check/post your correlation matrix or, even better, a matrix of scatterplots.

The highest correlation value 0.71 and VIF 2.6 are not so bad. But think about the interpretation.

When you write "for a 1 unit increase in cognitive test score" and look only at the coefficient $c_{Score}$, you implicitly presuppose that all other variables stay the same.

In your case, let us say "A" is 0.71 correlated with the "Score" and the coefficient $c_A$ is large positive, while $c_{Score}$ is small negative. Then for a 1 unit increase in "Score" you also have 0.71-unit increase in "A". The total effect is $0.71c_A + c_{Score}$, which is positive, the risk is increasing. The same logic for each correlated (and anticorrelated) variable. If "B" is anticorrelated with "Score" and $c_B$ is large negative, the total effect is again positive.