Why isn't the sample distribution of r normal?

according to the central limit theorem - the more samples you take from a population, no matter what shape the distribution is, the more normal your sampling distribution becomes.

This is incorrect in several respects. (I expect you've been told something close to this, but it's not the case.)

So why, despite the central limit theorem, is the sample distribution of r not normally distributed?

The sample correlation statistic $r$ can be construed as a kind of (scaled) mean (especially if you define it with an $n$ denominator), and the CLT should apply to it. But the CLT is a theorem about the limit as $n\to\infty$; you have finite $n$. At finite sample sizes the distribution won't be normal -- indeed this should be obvious, since $r$ is bounded. The bounds will tend to make it skew as you move toward one or the other.

Indeed, even the effect you thought was CLT -- the one where increasing the sample size tends to make the sampling distribution of means more normal -- applies to $r$ too. As you take larger samples, $r$ does tend to be more nearly normally distributed in a very wide variety of circumstances.

You can investigate this fairly easily using simulation.

However, while it becomes more nearly normal as $n$ increases for a given population $\rho$, it is still generally skew at every finite sample size (when $\rho\neq 0$). The same applies when taking sample means from skewed distributions --- the skewness decreases with larger samples, but it doesn't go away.

Not so! If the distribution you draw samples from is skewed, the sample means will also be skewed (but typically substantially less so): 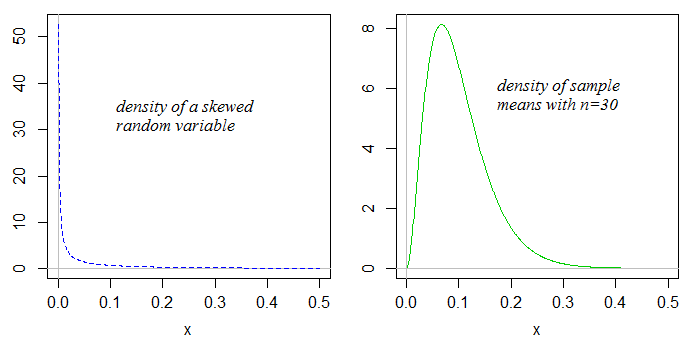 As the sample size gets larger, the skewness in the sample mean will tend to reduce.

Not the answer you're looking for? Browse other questions tagged correlation central-limit-theorem inference or ask your own question.

2
Distribution of a sample from a normal population
10
Question about normality assumption of t-test
2
Why can we assume a single sample is normally distributed?
0
Central Limit Theorem - Significance of Sample Count
0
Central limit theorem and normal distribution confusion
2
Why check for normality of data in a sample?
1
Why does bootstraping not seem to produce a normal distribution for this data?
0
Non-normal sample from a non-normal population (option returns) does the central limit theorem hold?