I have two arrays that I would like to do a Pearson's chi-squared test (goodness of fit). I want to test whether or not there is a significant difference between the expected and observed results.

Here's what I have

where 203 is the chi square test statistic and 9.07e-44 is the p value. I'm confused by the results. The p-value = 9.07e-44 < 0.05 therefore we reject the null hypothesis and conclude that there is a significant difference between the observed and expected results. This isn't correct because the numbers are so close. How do I fix this?

Here is a calculation using Stata. Note that the expected frequencies have been scaled so that they have the same sum as the observed.

The very high chi-square statistic and very low P-value look like just a side-effect of feeding the software with an inappropriate set of expected frequencies. That is, big discrepancies between observed and expected occur because the expected frequencies are much too low. But it is surprising, indeed shocking, that the Python software doesn't check that.

Detail for Stata users only: chitesti is downloadable via ssc inst tab_chi.

@NickCox has done a good job pointing out that your expected values don't match your observed values, in that they don't sum to the same total. But I gather your question is motivated by surprise that the chi-squared test is significant (which holds even with the presumably correct expected values), given that the proportions seem so similar. 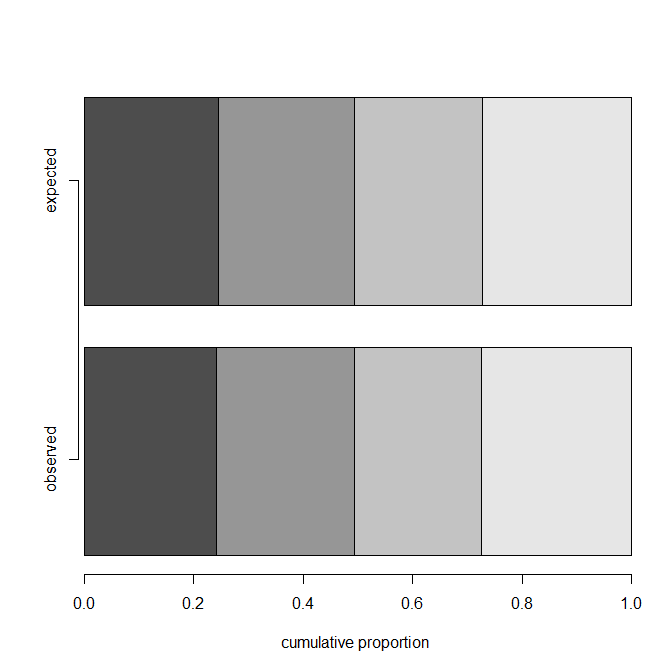 This reflects a very common misunderstanding of the nature of hypothesis testing and $p$-values. It is true that the proportions are very similar, but they are not identical—they differ at the third decimal place. Moreover, you have an enormous amount of data ($N = 46819$). When you test a hypothesis (e.g., by running a chi-squared test), the $p$-value conflates how far your data are from the expected values with how uncertain you are that the difference exists. Because you have so much data, in your case we can be reasonably certain that data as far (not very!) from the null are somewhat unlikely. This is simply the way hypothesis testing works when you have very large $N$ (see this excellent CV thread: Why does frequentist hypothesis testing become biased towards rejecting the null hypothesis with sufficiently large samples?). In other words, there is nothing to "fix" in your results (other than the inconsistent values).

(Adjust it to your particular needs)

Not the answer you're looking for? Browse other questions tagged hypothesis-testing chi-squared-test p-value python scipy or ask your own question.