In statistical inference, problem 9.6b, a "Highest Density Region (HDR)" is mentioned. However, I didn't find the definition of this term in the book.

One similar term is the Highest Posterior Density (HPD). But it doesn't fit in this context, since 9.6b doesn't mention anything about a prior. And in the suggested solution, it only says that "obviously $c(y)$ is a HDR".

Or is the HDR a region containing the mode(s) of a pdf?

I recommend Rob Hyndman's 1996 article "Computing and Graphing Highest Density Regions" in The American Statistician. Here is the definition of the HDR, taken from that article:

Figure 1 from that article illustrates the difference between the 75% HDR (so $\alpha=0.25$) and various other 75% Probability Regions for a mixture of two normals ($c_q$ is the $q$-th quantile, $\mu$ the mean and $\sigma$ the standard deviation of the density): 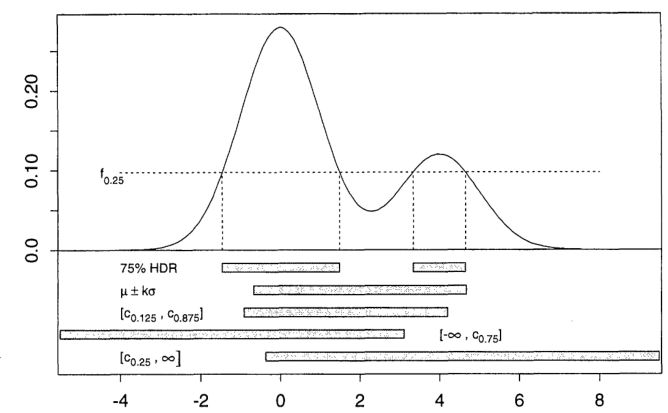 The idea in one dimension is to take a horizontal line and shift it up (to $y=f_\alpha$) until the area above it and under the density is $1-\alpha$. Then the HDR $R_\alpha$ is the projection to the $x$ axis of this area.

Of course, all this works with any density, whether Bayesian posterior or other.

Here is a link to R code, which is the hdrcdepackage (and to the article on JSTOR).

If $1-\alpha$ is your confidence level, you can always find two quantiles $q_{1-\alpha/2 + c}$, $q_{\alpha/2 -c}$ that will give you a working interval. There are a bunch though, and they all have different lengths. You want the shortest.

One of the most distinctive property of HDR’s is that of all possible regions of probability coverage, the HDR has the smallest region possible in the sample space. “Smallest” mean with respect to some simple measure such as the usual Lebesgue measure; in the one-dimensional continuous case that would be the shortest interval, and in the two-dimensional case that would be the smallest area of the surface. In Bayesian analysis a similar approach is called the highest posterior density region (HPD) and the posterior density is used as a measure.

HPD is one of the methods for defining a credible interval in Bayesian statistics.

Not the answer you're looking for? Browse other questions tagged confidence-interval estimation definition credible-interval highest-density-region or ask your own question.

8
How to get multivariate credible interval estimate(s) / highest density regions (HDR) after MCMC
5
Computing Highest Density Region given multivariate normal distribution with dimension $d$ > 3
3
How to determine the cut off value of an hyperellipsoid in order to retrieve a single quantile of a multivariate normal distribution?
2
Highest Posterior Density (HPD) region of the marginals vs. of the joint distribution
2
Is the boundary of an HDR a region of the sample space with equal density value?
2
Highest Density Interval for the measure of central tendency