What is the intuitive meaning behind a random variable being defined as a "lattice"?

Is there a geometric interpretation for why this definition is called a lattice?

It means that $X$ is discrete, and there is some kind of regular spacing to its distribution; that is, the probability mass is concentrated on a finite/countable set of points ${d, 2d, 3d, \dots}$.

Note that not all discrete distributions are lattices. Eg if $X$ can take on the values $\{1, e, \pi, 5\}$, this is not a lattice since there is no $d$ such that all the values can be expressed as multiples of $d$.

This terminology connects the random variable with concepts of group theory used to study geometric symmetries. You might therefore enjoy seeing the more general connection, which will illuminate the meaning and potential applications of lattice random variables.

In mathematics, a "lattice" $\mathcal{L}$ is a discrete subgroup of a topological group $G$ (usually assumed to have a finite covolume). 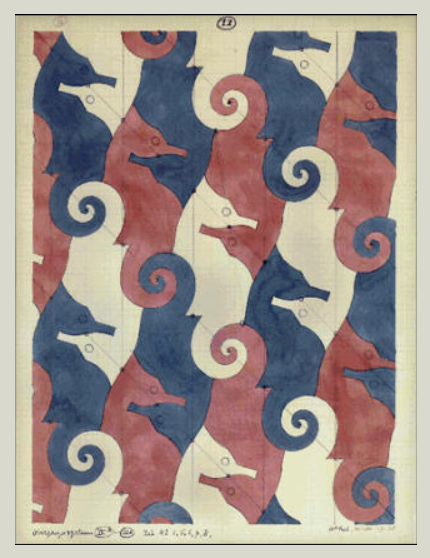 Any pair of these sea horse figures--where one is right side up and the other upside down--can be a fundamental domain for the visually evident lattice in the Euclidean plane. M.C. Escher, Sea Horse (No. 11).

A "lattice" random variable $X$ is supported on a lattice in $(\mathbb{R}^n, {+})$. This means that all its probability is contained in the closure of the lattice. Because a lattice is discrete, it is closed, so the values of $X$ are on the lattice almost surely: $\Pr(X\in\mathcal{L})=1$.

The group implied by the question is the additive group of real numbers, $(\mathbb{R}, {+})$, with its usual (Euclidean) topology. As a subgroup, a lattice $\mathcal{L}$ must include $0$. That alone will not suffice, because the quotient $\mathbb{R}/\{0\}$ has infinite volume ("volume" = "length" in this 1D case). Thus there is at least one nonzero element $g\in\mathcal{L}$. All of the powers of this element must also be in the subgroup. Since the operation is addition, the $n^\text{th}$ power of $g$ is $ng$. Therefore $\mathcal{L}$ contains all integral multiples of $g$ (including the negative ones).

If there are two elements $h,g\in\mathcal{L}$ which are not powers of each other, it is easy to show (using a tiny bit of number theory) that (1) all the combinations $ng+mh$, for $n,m\in\mathbb{Z}$, are in one-to-one correspondence with the ordered pairs $(m,n)$ and (2) these combinations are dense in $\mathbb{R}$, which would mean $\mathcal{L}$ is not discrete. From this it is straightforward to conclude that all elements in $\mathcal{L}$ are powers of a single number $g$. This is the generator of $\mathcal{L}$.

(An analogous argument shows that lattices in $(\mathbb{R}^n, {+})$ must have $n$ generators. Generators for the Escher watercolor could be, say, a translation of two units down and a translation one unit down and one unit to the right, approximately.)

Consequently, corresponding to any real-valued lattice random variable $X$ on $(\mathbb{R}, {+})$ must be a generator $g\ne 0$, whence

The definition in the question therefore can be understood as that of a non-negative lattice variable. We might also want to stipulate that $\Pr(X=0) \lt 1$, for otherwise $X$ is supported on the subgroup $\{0\}$ which, having infinite covolume, is not a lattice.