How to interpret this autocorrelogram graph?

I am new to statistics. I found a script which makes a autocorrelogram graph(see attached) of spike timings of a neuron. I got the graph but I am not able to interpret it. Matlab Code below. 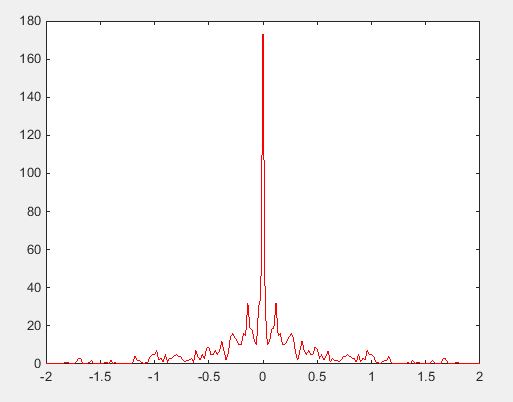 What the above graph mean? At zero there is maximum correlation and after that the correlation decreases?

EDIT: I read your code wrong earlier. You are estimating the autocorrelation, not the ISI distribution as I thought before. Your variable name tricked me!!

Though the inter-spike-interval (ISI) distribution has a relation to autocorrelogram, they are not the same thing. The (unnormalized) autocorrelation (which should really be called auto-2nd-moment) of spike trains is usually defined as

where $x(t)$ is the spike train, and assuming some wide-sense stationarity (hence, doesn't depend on $t$). It's usually estimating by binning with a small window size such that in each bin there's either 0 or 1 spike, and averaging over time.

I hope this clarifies your confusion (of variable name).

I strongly recommend Theoretical Neuroscience by Dayan and Abbott.

Really weird. At first sight, this appears to be the AutoCorrelation of a Signal, in the Signal Processing sense, calculated as the convolution of the signal with itself (in the y axis), under a given delay (x axis). This would explains the symmetry and the big amplitude at zero.

But the code is showing something totally different: the spike values concatenated with itself with a time difference (x-axis), and then making an histogram from that (y-axis).

The graph gives the number of spikes(y-axis) as a function of time window(x-axis). Explaining further, One by one we take all the spikes of a spike train(the timestamps of spike of neurons) and w.r.t each spike calculate the number of other spikes happening in a given time window(+- 2 sec). Time window of +-2 sec is chosen because we are interested in that time range. The graph is symmetric along y-axis because suppose nth spike happened 1 sec after mth spike then mth spike happened 1 sec before nth spike. To summarize this graph shows the cumulative sum of number of spikes around each spike as a function of time lag, so at time lag 0 we get the total number of spikes in the spike train and as the time lag increases the number of spikes decrease. Next peaks are observed again where neuron fires again and so on. Also helps in seeing if neuron fires in a cyclic manner(tuned to some brain rhythm) which can be seen by peaks after the first peak. Below link gives a good description.

Not the answer you're looking for? Browse other questions tagged matlab autocorrelation neuroscience or ask your own question.