Given two absorbing Markov chains, what is the probability that one will terminate before the other?

I have two different Markov chains, each with one absorbing state and a known starting position. I want to determine the probability that chain 1 will reach an absorbing state in fewer steps than chain 2.

I'm not certain where to go from here though. Analogous problems I've seen involve dice (e.g., rolling a sum of 7 before a sum of 8), but that is easier to solve because the probability of rolling a particular sum is constant and independent of the number of steps taken so far.

The limiting probabilities of these three states in the product chain give the chances of interest.

This solution involves some (simple) constructions. As in the question, let $\mathbb{P} = P_{ij}, 1 \le i,j\le n$ be a transition matrix for a chain $\mathcal P$. When the chain is in state $i$, $P_{ij}$ gives the probability of a transition to state $j$. An absorbing state makes a transition to itself with probability $1$.

A simple example may clarify these constructions. Suppose Polly is flipping a coin with a chance $p$ of landing heads. She plans to do so until observing a heads. The states for the coin flipping process are $S_P = \{\text{T},\text{H}\}$ representing the results of the most recent flip: $\text{T}$ for tails, $\text{H}$ for heads. By planning to stop at heads, Polly will apply the first construction by making $\text H$ an absorbing state. The resulting transition matrix is

It is in block matrix form with blocks corresponding to the second matrix $\mathbb Q$: 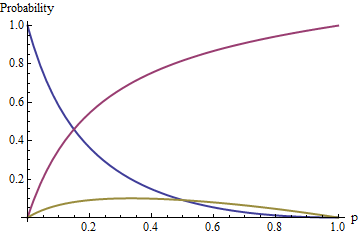 Not the answer you're looking for? Browse other questions tagged probability markov-chain transition-matrix or ask your own question.

2
probability that noone will have to wait for change