Is this data from machine votes or human votes? Opinions appreciated!

A friend recently entered (but lost) an online competition where the winner was chosen based on total votes. Only one vote would register per IP address so as to discourage multiple votes coming from one person. The only contest rule was that "machine or automated voting" was not allowed. The following data is a small snapshot of the vote activity for the eventual winner:

Note that the beginning data was collected at 2 minute intervals, but later there are gaps before a large gap when the final vote count is presented.

When I put the contiguous data (11:22 - 11:54) into excel and then "fill down" for a prediction, I get a predicted final vote count = 4246... less than 100 votes from the actual count. In addition, the arrival of votes just doesn't look as random as I'd expect if independent human voting was happening. I'm pretty sure there is some degree of human voting, but I'm speculating that there is a strong machine element at play as well.

I'd sure appreciate any opinions / analysis / advice that the community can offer. Do you believe there is machine voting going on here? How strongly do you believe this?

One statistical test you can do is see whether the arrival time of past votes influences the arrival time of future votes. If it does, that would strongly suggest that the votes were orchestrated in some way (e.g., a machine issuing one vote per minute, or issuing 100 votes in one minute and none for the next).

This suggests to a good null hypothesis, which is that the data are drawn from a Poisson distribution. That's our benchmark for random, independent voting patterns, where the time of one vote doesn't tell you anything about the timing of the next vote. So how do we figure out whether the data we have is Poisson-distributed?

We can try to falsify this null hypothesis--convince ourselves the data are not Poisson-distributed--by testing a statistic called index of dispersion. Basically, this measures whether the standard deviation of the data is larger or smaller than you would expect if it were a Poisson variable.

We'll use just the 2-minute windows to simplify things; that means that, under the null hypothesis that the data is Poisson distributed, the number of votes in each 2-minute window comes from a Poisson distribution with the same rate parameter. We just have to find out what that rate parameter is. Our best guess is just the mean of the count in each window. I'm going to do this in Python since that's what I'm most familiar with:

So the average number of votes per window is 3.375. We can start by comparing a histogram of the plots to a true Poisson variable: 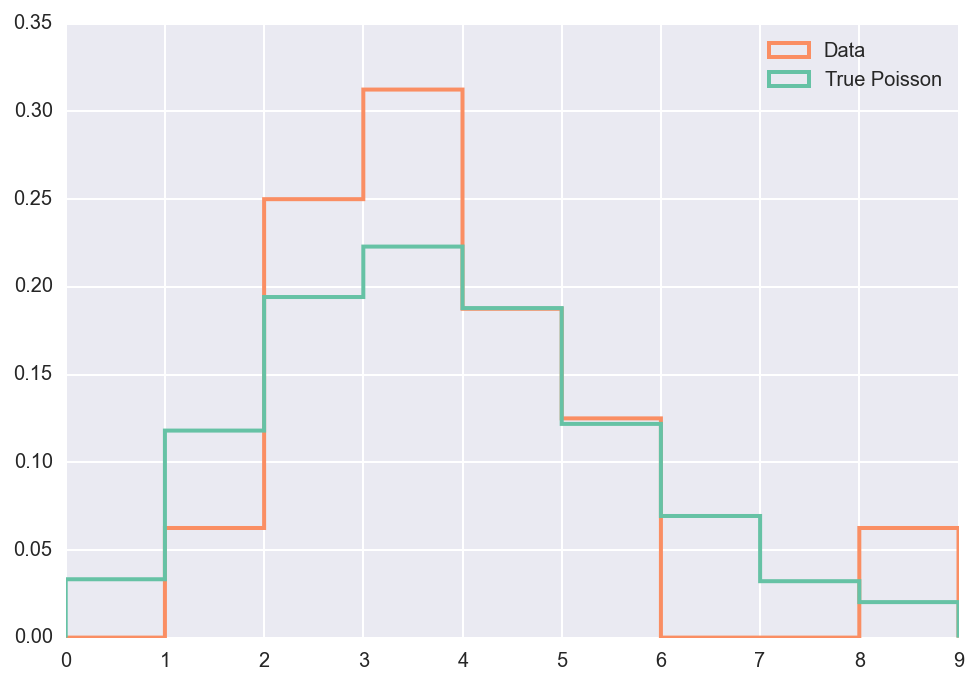 Hmm. It looks like it's a little bit underdispersed--concentrated towards the center, and away from the tails, compared to a Poisson distribution. But there's no smoking gun, so let's go on with the statistics. What's the index of dispersion?

So these votes are slightly more regular (less variable) than we would expect from a Poisson distribution.

Here's a density plot of that distribution: 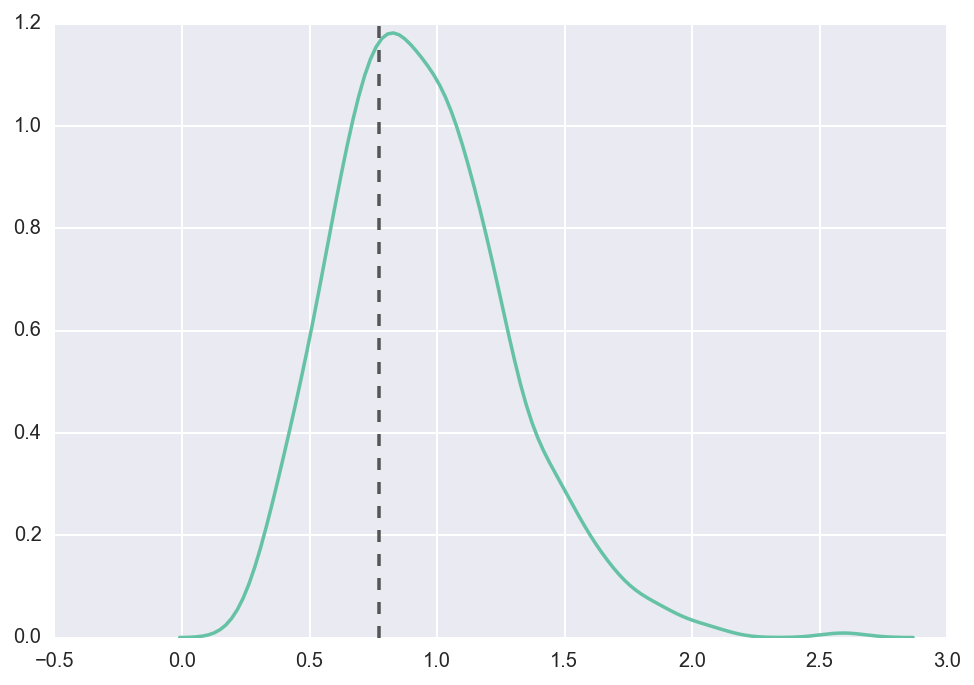 You can already probably see that 0.77 (the dashed line) is fairly close to the peak of this distribution; it doesn't look implausible that we'd see a value like that from truly Poisson data. We can quantify this by producing a confidence interval for the dispersion index under the null hypothesis--basically, if the data were truly Poisson, what's an interval we would be 90% sure the dispersion index would fall inside? We find this by calculating the 2.5th and 97.5th percentiles of how it would be distributed:

So the index of dispersion of 0.77 that we saw above is well within the realm of possibility for truly Poisson-distributed data.

This doesn't necessarily mean that the data actually is Poisson-distributed! It might be that we just don't have a large enough sample to tell. For instance, if we saw the same index of dispersion over a sample of 1,000 2-minute windows...

...then we could much more confidently reject the hypothesis that our data was Poisson. But since our confidence interval with the smaller number of buckets is a lot wider, we don't have as much power to detect deviations from Poisson-ness.

To sum up: if the votes are actually different from how a bunch of independent humans would make them, we don't have enough data to tell.

Not the answer you're looking for? Browse other questions tagged machine-learning or ask your own question.

37
Creating a “certainty score” from the votes in random forests?
2
Which machine learning methods can I use to study/analyze this ordinal data? (generated by a hypothetical turing machine)
0
Machine Learning on scarce data - how to tackle this task?
1
Should I keep this machine learning resolution?
2
Using AFL (Australian Rules Football) data to predict Brownlow votes
4
Why does skew and heteroscedasticity lead to bias?
0
Classification methods for univariate time series