How to add a third variable to a bar plot?

I'm trying to find the best way to show the following data:

So far this is what I have: (feel free to play with it here)

I like the idea of displaying it sorted by difference so you can see what subjects I lagged in and did well in, so I've tried like this:

But I also want to figure out how to incorporate the semester into the graph to see what semesters I did better/worse in, like so:

How could I incorporate the semester into the bar graph as well as sort it by difference? Or alternatively, should I throw out the bar graph idea and use an altogether different graph?

I'd avoid bar charts here. A dot chart like this scores more highly on most criteria for such data. The term "dot chart" (or "dot plot") is overloaded in statistical graphics. This flavour is often called a Cleveland dot chart after William S. Cleveland, who promoted its use from the mid-1980s on. See a link to Cleveland's website here 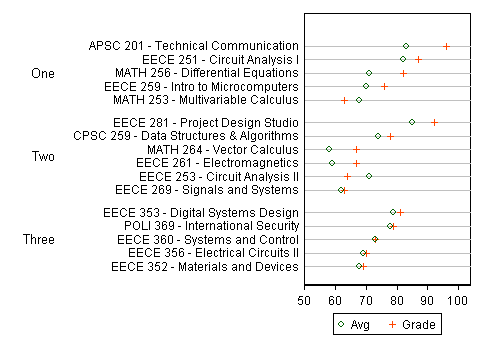 As a bonus, some typos in course names were corrected. It seems that you care about the Departments, course numbers and course names. In other problems, such text descriptors would often be shortened. Here there is enough space, especially when you start the scale at 50. You had to choose a small font in your design, but that can be avoided.

Here is a variation in which the grades are sorted by the difference (grade $-$ average): 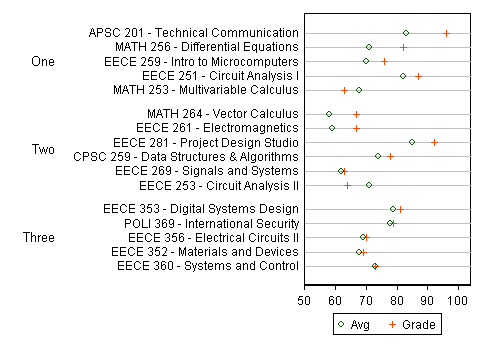 Something often has to be downplayed. In this design I give up on the idea of showing differences explicitly: they are just implicit.

For the record, this was done with the Stata code below. Something similar should be trivial in all major statistical programs.

Note: I looked at your links after thinking up my suggestion. It's a weakness of both that they don't suggest this basic kind of graph.

Threads here mentioning such plots include this, this and this.

Last but not least, references as well as a detailed example can be found here.

Not the answer you're looking for? Browse other questions tagged dimensionality-reduction multivariable barplot data-visualization or ask your own question.

19
How to best visualize differences in many proportions across three groups?
6
What to call this graph showing icons for artists on a horizontal axis indicating number of unique words used?
5
Pie charts vs. dot plots
5
Is there a better way than side-by-side barplots to compare binned data from different series
3
Alternative visualizations to 3D bar chart

7
Stacked bar plot
7
Group vs Stacked Bar Plots
0
How would one visualize this data using bar charts?
5
How to visualize two bar charts with very different scales without looking redundant
6
Bar plots with variable bases (intensive and extensive variables at once)
4
What is the best ratio between width and height in a Bar Chart?
4
What is the name for this bar chart visualization where successive bars drill down one segment of the previous bar