B is significant correlated with Y, but not a significant predictor of Y in a multiple regression. What can it mean?

I then did a multiple regression analysis, where i used the four independent variables to predict the dependent variable. My model was significant, and with a high F value. But my Standardized coefficient estimates between the variables are different. Y-- A=.40* B=.08 C=.22* D=-.13*

As you can see D is now a significant predictor of Y, and at the same time B is not. I have checked for multicollinearity, and all looks good (to the best of my knowledge). I understand that there most be some underlying relationship between the independent variables, but how do you find it and explain it?

Note: I have read some similar questions here, but I don't find them covering the same question I have.

Remember that whereas simple regression presents a "total" effect of your single predictor, multiple regression yields the "unique" effect of each predictor after partialing out any shared explanatory power. For example, if we wanted to estimate children's weights from their heights and ages, height and age likely explain a lot of the same variability in weight because taller children tend to be older. 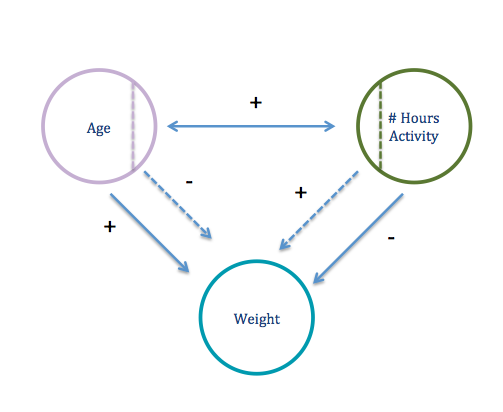 Each circle represents one of the variables in the example. The dotted line within the two predictor circles separates out the portion of that predictor that shares explanatory power with the other predictor. The small portion of the # hours circle is the portion of explanatory power that is is shared with age. The dotted lines represent the portion of the total effect of a predictor that is really driven by the other predictor. For example, the dotted line with the + symbol is the part of the # hours simple relationship that is really driven by child age. The solid lines represent the partial correlation of that predictor with the outcome over and above any shared explanatory power of the two predictors. The total effect would be a combination of the dotted and solid lines stemming from the same predictor variable. As we can see, the + and - relationships would sort of wash each other out. Thus, the partial correlation would be stronger than the simple correlation. The way that suppression works with more than 2 predictors gets a bit more complicated, but I bet there is some overall relationship among your predictors. If you calculate (or ask the computer to calculate) tolerance, this should help you know what's going on. Tolerance varies from 0 to 1 and tells you the extent to which your predictors are orthogonal. 1 indidicates that there is no multicollinearity and 0 indicates that there is complete multicolinearity (fun fact, if you regressed D on A, B and C the $R^2$ you would obtain would be 1-tolerance). Since there are more than 2 predictors, the multi collinearity issue is more complex than just, "are there simple relationships among my predictors". As such, I think tolerance would be a better measure of this. In terms of explaining why such suppression exists, I would think about the simple example above and consider whether it would make sense that such a phenomenon is happening with your own data. Hope this is helpful!

A tolerance of .67 means that something like 33% of the variability in one of your predictors is explained by the other 3 predictors. This seems, to me, like a non trivial amount of redundancy.

Are the results that you show for the multiple regression really correlations? or are they the coefficient estimates?

With your check on multicolinearity, what did you see? was there some relationship, just not enough to worry you? or was there really no relationship?

Here is a simple example in R that shows with moderate correlation, neither x1 or x2 alone is a significant predictor of y, but including both is very significant: