Is tossing a coin a fair way of randomising a group into two groups?

So myself and my uncle are having an argument over whether a coin flip is truly random. I argue it isn't because in real terms a coin tosser will always manipulate a coin so the result isnt 50/50 therefore it is not a good choice as a randomisation technique for assigning groups in clinical trials. However he argues that it is the minute imperfections in the coin tossing that creates the randomness. So then he postulated a machine that would eternally be able to toss a fair coin and have it land on heads and to be honest I just need someone to settle this argument for me. Is tossing a coin a fair way of randomising a group into two groups?

Yes, coin flip is truthfully random process. While it is possible to load a die, so that it favours certain outcomes, you cannot bias a coin (see paper by Andrew Gelman and Deborah Nolan published in The American Statistician for further details). You can argue that coin toss is a deterministic process and in fact you can build a mathematical model that describes the process, however its outcome is random. For learning more on physics on coin toss check lectures by Santosh S. Venkatesh on Probability course on Coursera.org where he describes the dynamics of coin toss in detail and provides an argument why it is truthfully random (Tableau 7), you can also check Keller's paper The Probability of Heads and short paper by Mahadevan and Hou Yong titled Probability, physics, and the coin toss). The deterministic process like this could be random because it is a kind of process where small changes in the initial parameters (velocity, angular velocity etc.) make a huge difference in the outcome, what makes its behaviour chaotic (check lecture by P. Diaconis titled The Search for Randomness).

Actual experiments have shown that the coin flip is fair up to two decimal places and some studies have shown that it could be slightly biased (see Dynamical Bias in the Coin Toss by Diaconis, Holmes, & Montgomery, Chance News paper or 40,000 coin tosses yield ambiguous evidence for dynamical bias by D. Adolus). Diaconis et al. reproduce a histogram of one of such experiments where 103 students tossed coins each 100 times (see below). 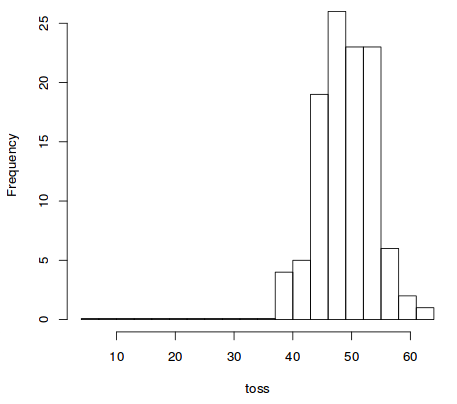 Notice that in real life people throw coins with different strength, at different height, start with holding coins lying on their hands with different angles, catch them at different time and in different way, atmospheric conditions differ etc., this makes the actual outcomes vary between coin tosses and coin tossers as in the picture above.

As A. Donda and Glen_b noticed, there were examples of people who learned how to purposefully throw coins to get certain outcomes and Diaconis et al. managed to build a coin tossing machine that could toss coin for a certain outcome.

Does this all make coin toss not reliable? Washington Post quotes one of the authors of Diaconis et al. paper:

I asked Holmes whether coin flips used for, say, football, should be eliminated because they are biased. The answer is no, as long as the person calling the flip doesn't know how the coin is going to start out. In football, the tosser is never the caller; the tosser is supposed to be a referee. But if you are both the caller and the tosser, well, that changes things. Knowing about the bias in coin tosses give you an edge, albeit a tiny one.

Also biases observed in the experiments in most cases are not really greater then what we would expect from random draws from Binomial distribution (see plot below), they vary between experiments and coins used. In most cases they fall into the 95% highest density region of binomial distribution parametrized by $p=0.5$ and sample size equal to total number of coin tosses in the particular experiment (i.e. we would expect 95% cases to be not more extreme then this). In two cases results fall outside the interval: in case of tosses by Janet (described by D. Aldous) and tosses by Robin's students (as described in CHANCE News). However it is hard to compare the experiments due to differences in used methodology (single tosser vs multiple tossers, single coin vs multiple coins etc.) and methodological flaws (e.g. in Robin's class case students were tossing the coins outside of class, so it was not monitored how carefully did they follow the instructions). 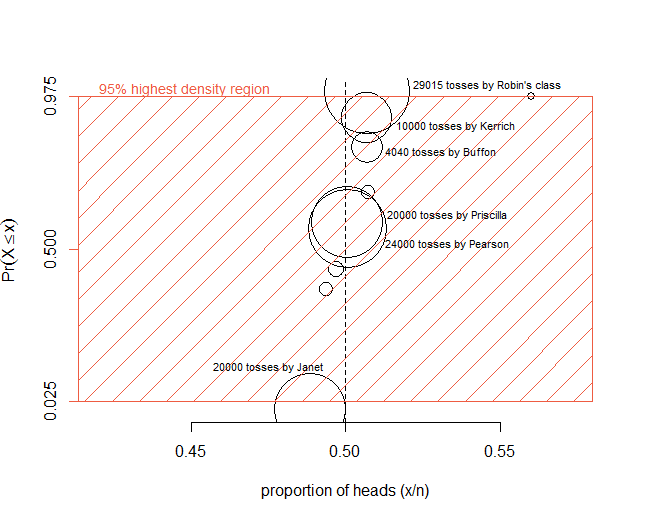 On the plot above we see proportions of heads in different experiments with accompanying 95% highest density region. The results are gathered from Flipping, spinning and tilting coins paper in CHANCE News, Coin Tossing and Spinning - Useful Classroom Experiments for Teaching Statistics paper by Helmut Kuchenhoff, and results from experiments by D. Aldous. Ball sizes reflect the sample sizes used in the experiments. On the $x$-axis we see the outcome (proportion of heads), and on the $y$-axis cumulative probability of outcome smaller or equal then the one observed as calculated from the binomial distribution.

Notice however that in most real life cases you do not need truthfully random values, but rather you are interested in numbers that behave like random numbers. No matter if you are doing statistics, or you implement a cryptographic algorithm to encrypt data, what is used for those purposes is pseudorandom number generators, i.e. deterministic algorithms that produce output that is hardly distinguishable from truthfully random values. This is enough even for cutting-edge cryptographic algorithms.

So summarizing, the research in this area gave mixed results and what can be said for sure is that there are multiple factors that influence coin toss. The answer for your question is yes, coin toss is random because it provides enough randomness to consider its outcome random.

Quote from E. Borel by Bruno de Finetti in his paper Probabilism: A Critical Essay on the Theory of Probability and on the Value of Science can serve as a motto for this answer:

"One can bet, in heads or tails, after the coin, already tossed, is in the air, so that its movement is determined. One can also bet after the coin has landed, on the sole condition that one does not see on what side it has landed. Probability does not lie in the fact that the event is undetermined (in the more or less philosophical sense of the term) but only in our inability to predict what possibility will take place, or to know what possibility has taken place."

Regardless of how fair the coin toss is, it is not a good way to assign treatments in a clinical trial. With a perfectly fair coin toss, it is possible that all of the subjects get assigned to the same treatment! While that would be rare, it would be fairly common to end up with a very lopsided distribution of treatments.

Bottom line: You want to randomly assign subjects to treatments, not randomly choose a treatment for each subject.

Not the answer you're looking for? Browse other questions tagged random-generation randomness random-allocation or ask your own question.

31
Generating random numbers manually
25
Is everyday probability just a way of dealing with the unknown (not talking quantum physics here)?
15
Do all observations arise from probability distributions?
6
Is independence subjective?
2
How do Bayesians deal with the fact that the treatment of fixed parameters as random variables can lead to inappropriate subjective probabilities?
4
Birthday problem independent events?
3
Using Standard Deviation and Flipping Coins
4
source of statistical uncertainties
3
Why is MAP and ML widely accepted?
4
sample size calculation for obtaining coin fairness
See more linked questions

3
How can you select one of two individuals at random using a biased coin
11
Given a coin with unknown bias, generate variates from a fair coin efficiently
2
Multilevel: Can I include two dummy variables of a 7-dummy-set into a random slope?
5
How to generate two groups of $n$ random numbers in $U(0,1)$ such that sum of these two groups equal?
2
Assign subjects into groups so that group means are as similar as possible
1
Test for equivalence after sampling into test groups
1
Is it possible to to have more than 2 groups for biased coin randomization? If no, is there any modifications supporting multiple groups?
0
Which test(s) should I use for RCT, 2 groups (intervention vs. comparator) and two DVs measured at multiple points (pre, post, 3, 6, 12 months)?