Control charts are all the rage at my company these days. Our "data analysts" (quotes are on purpose) are putting control limits on almost all graphs that they produce. The other day we were looking at some graphs of calls into our support call center over the last year. We have measurements of the number of calls for each week that are plotted on a line graph. Recently, the analysts who prepare these graphs have started putting lines on the graphs indicating "control limits".

The question I have is about how they are calculating where these control limits should be. When I asked how they determined the limits here is the answer I got:

The purpose of a control chart is to identify, as quickly as possible, when something fixable is going wrong. For it to work well, it must not identify random or uncontrollable changes as being "out of control."

The problems with the procedure described are manifold. They include

A simulated dataset illustrates these principles and problems. 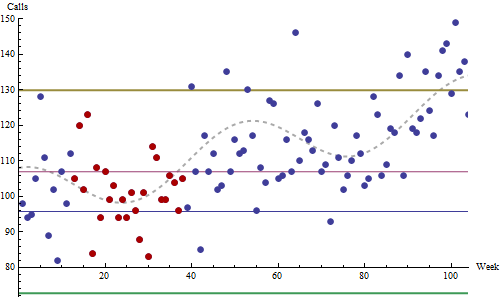 The simulation procedure creates a realistic series of data that are in control: relative to a predictable underlying pattern, it includes no out-of-control excursions that can be assigned a cause. This plot is a typical outcome of the simulation.

These data a drawn from Poisson distributions, a reasonable model for call rates. They start at a baseline of 100 per week, trending upward linearly by 13 per week per year. Superimposed on this trend is a sinusoidal annual cycle with an amplitude of eight calls per week (traced by the dashed gray curve). This is a modest trend and a relatively small seasonality, I believe.

(One doesn't usually project control lines backwards in time, but I have done that here for visual reference. It's usually meaningless to apply controls retroactively: they're intended to identify future changes.)

Note how the secular trend and the seasonal variations drive the system into apparent out-of-control conditions between weeks 40-65 (an annual high) and after week 85 (an annual high plus over one year's cumulative trend). Anybody attempting to use this as a control chart would be mistakenly looking for nonexistent causes most of the time. In practice, this system would be hated and soon ignored by everyone. (I have seen companies where every office door and all the hallway walls were covered in control charts that nobody bothered to read, because they all knew better.)

The right way to proceed begins by asking the basic questions, such as how do you measure quality? What influences can you have over it? How, despite your best efforts, are these measures likely to fluctuate? What would extreme fluctuations tell you (what could their controllable causes be)? Then, you need to perform a statistical analysis of the past data. What is their distribution? Are they temporally correlated? Are there trends? Seasonal components? Evidence of past excursions that might have indicated out of control situations?

Having done all this, it may then be possible to create an effective control chart (or other statistical monitoring) system. The literature is large, so if this company is serious about using quantitative methods to improve quality, there is ample information about how to do so. But ignoring these statistical principles (whether through lack of time or lack of knowledge) practically guarantees that the effort will fail.

The general idea of control charts is to distinguish between common cause variation and special cause variation. The idea is that the process is fairly stable and generates data from a given distribution (though the Poisson makes more sense for number of calls than the normal). One big advantage of control charts is that they limit overreacting to natural variation while still allowing for finding when the process has changed.

Choosing a set of observations because they have small variation would almost guarantee that the limits are too narrow and therefore increase the inappropriate reactions to normal variation. Using all the data makes a lot more sense, and using a Poisson C chart might be better than an x-bar chart. But, it also seems that a call center would expect differences due to holidays or season (depending on what is being supported), so the underlying assumptions may not even be appropriate here.

It sounds like they are doing something because they can rather than because it answers a meaningful question.

2
How to interpret a control chart containing a majority of zero values? (Part 2)
0
How would one visualize this data using bar charts?
5
Advice on a good production level SPC (statistical process control) package?
3
Color standards for control charts
2
Control lines that converge?
2
Control charts of seasonal data
3
On properly setting up a control chart