I have a dataset in which there are about 500 measurements for a particular scoring metric. The data are normalized so that the mean is 0 and the standard deviation is 1, but the distribution is somewhat arbitrary. Here's a histogram: 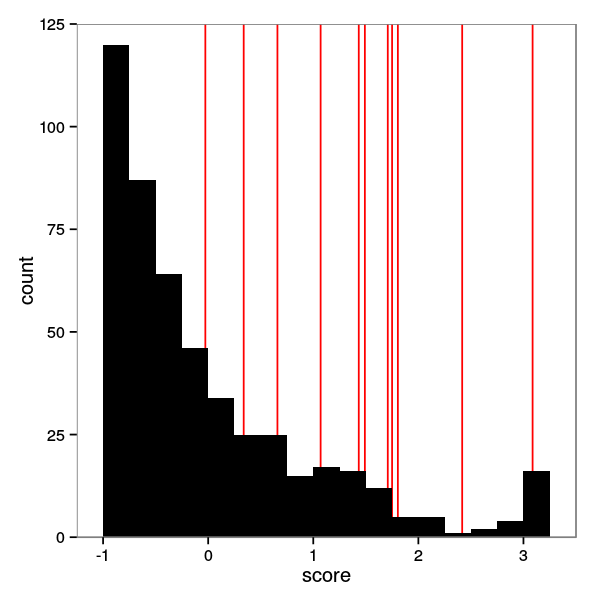 I have no a priori reason to expect a particular distribution either. And these data comprise the entirety of the population.

Within this set, there are 11 data points of interest, as determined by a separate metric. These are indicated by the red lines on the histogram. It appears that the scores for these points in the first metric are not random, but are instead significantly higher than average (the mean score for these 11 points is ~1.43).

How can I test that these 11 data points are not drawn randomly from the population?

This is the null distribution for the test statistic (the sample mean) for the hypothesis that the sample is drawn at random.

You then see where the sample mean falls in the null distribution (specifically find the proportion of results at least as extreme as your sample proportion).

Here's an illustration for data somewhat similar to yours: 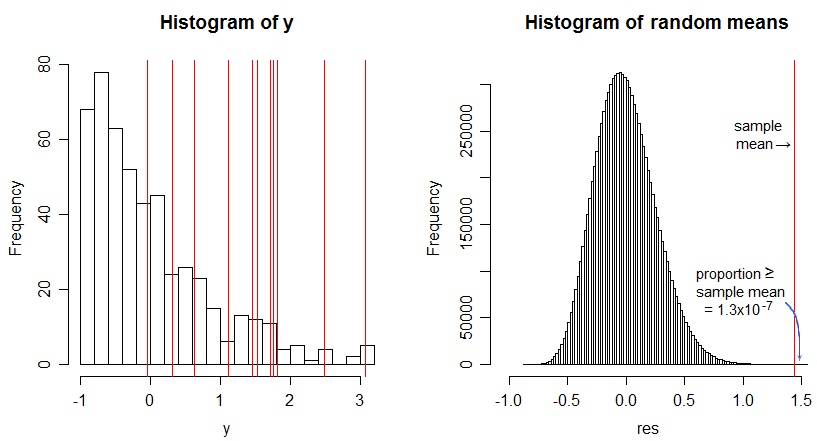 For a one-tailed test you compute the proportion whose means are at least as far from the population mean in the specified direction as your sample is (that's what's calculated above). If your alternative is two-tailed, you also need to identify what you mean by 'at least as extreme in the other direction' (it might be 'the mean is at least as far below', or it might simply be that you're after a similarly extreme quantile in the other direction -- which would result in doubling the tail proportion). In the two-tailed case, it may be easier to begin by thinking about a suitable form of rejection rule and then adjust your rejection rule to the desired significance level.

In either case if the resulting p-value is less than your significance level, you would reject the null hypothesis of random selection from the population.

All of the foregoing assumes that the decision to compare means was not made on the basis of what you see in the sample, but was a comparison that you would want to make before the sample was looked at.

If you want a more general test than a comparison of means, you might look at a similar procedure based off a goodness of fit statistic (but such broadening of the alternatives being considered will usually bring with it a loss of power). If the decision to restrict the comparison to a test of means was based on looking at the data (but you'd still have wanted some comparison), then this option may be about the only reasonable choice.

12
What is the difference between distribution free statistics/methods and non-parametric statistics?
6
Alternative to Kolmogorov-Smirnov test when parameters are estimated from the data
3
Non-normal distribution even with Kruskal-Wallis test
5
Alternative to Chi-Square, etc for categorical variables
4
Probability that randomly chosen value from one distribution is greater than randomly chosen value from another distribution
2
Comparison of multiple independent data points (of variable number) for each subject within a group
1
Creating groups from an extremely positively skewed population (further explanation + image in text)
21
Non-parametric test if two samples are drawn from the same distribution