Clarifications regarding reading a nomogram

Following is a nomogram created from mtcars dataset with rms package for the formula: 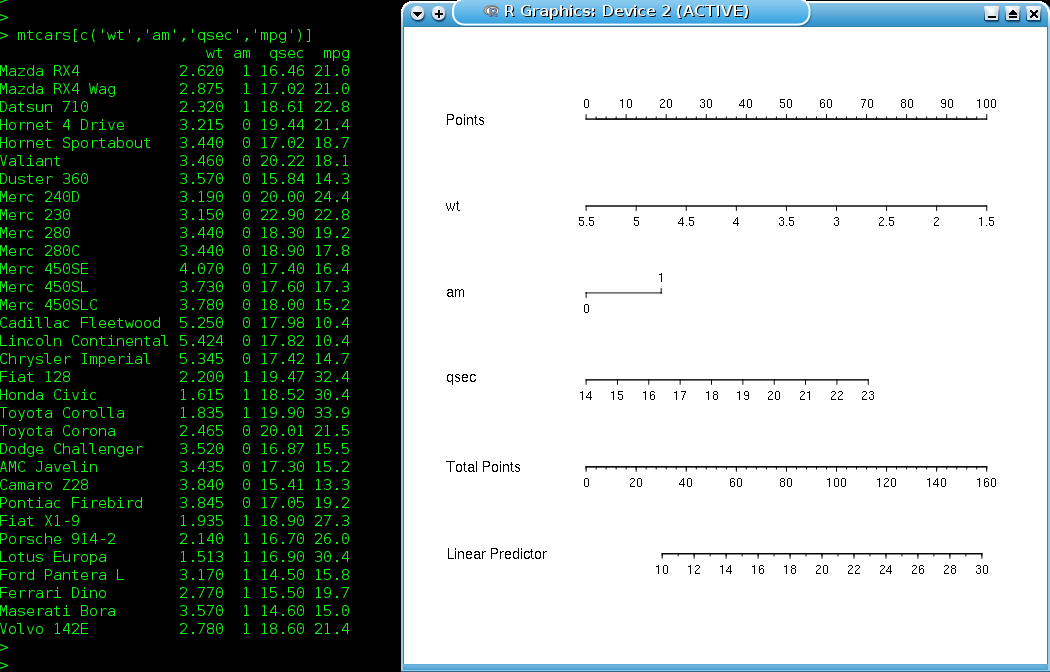 I am not clear what are these 'Points', 'Total Points' and 'Linear Predictor'. Which one of these represent mpg, the outcome variable? I will appreciate any explanation.

Edit: considering excellent suggestions by @Glen_b for easy reading of points etc, following could be an alternative nomogram: 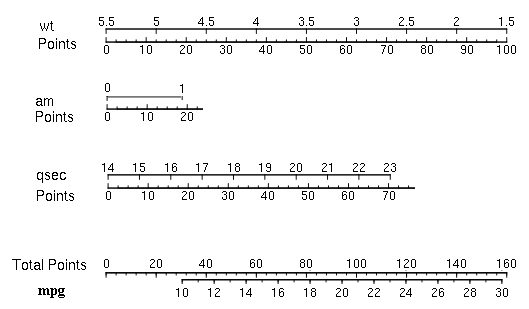 Since outcome or response variable is available, it can be used instead of the term 'Linear Predictor'. It also become self-explanatory as to how the nomogram needs to be read.

For each variable, you find its value on the relevant scale. For example, imagine we wanted to find a predicted mpg for a car with wt=4, am=1, qsec=18: 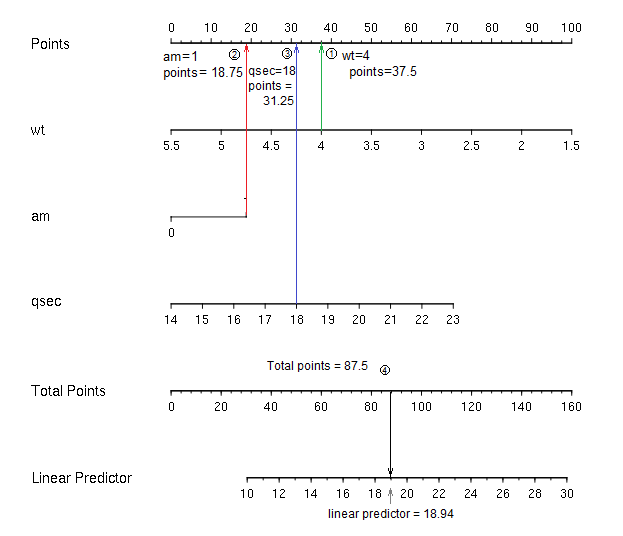 which gives a predicted mpg of about 18.94. Substituting into the equation gives 18.95, so that's pretty close. (In practice you would probably only work to the nearest whole point -- and so get about 2 figure accuracy - "19 mpg" - out, rather than 3-4 figures as here.)

One of the chief benefits of such a diagram to my mind is that you instantly see the relative effect of changes in the different predictor variables (IV) on the response (DV). Even when you don't need the diagram for any calculations, it can have great value in terms of simply displaying the relative effects of the variables.

Does it work the same way for non-linear or polynomial regressions?

In either case, the scale for $x_1$ would work exactly as above, but in case:

(a) the scale for $x_2$ won't be linear; e.g. if $f$ is monotonic decreasing but (roughly) quadratic, you might have something like this:

It's possible for such functions to have several turning points, where scales would break and flip over multiple times - but the axis line only has two sides.

With points-type nomograms this presents no difficulty, since one may move additional scale-sections up or down (or more generally, orthogonally to the direction of the axis) a little until no overlap occurs.

(More than one turning point can be a problem for alignment-type nomograms; one solution shown in Harrell's book is to offset all the scales slightly from a reference line, on which the value's position is actually taken.)

In the case of GLMs with nonlinear link function, the scales work as above, but the scale of the linear predictor will be marked with a nonlinear scale for $Y$, something like (a) above.

Examples of all of these situations can be found in Harrell's Regression Modeling Strategies.

Just a couple of side notes

Not the answer you're looking for? Browse other questions tagged regression multiple-regression data-visualization predictive-models regression-strategies or ask your own question.