The plot of GDP over time shows clearly a trend. I ran a Dickey Fuller and the series turned out to be stationary by using the option drift (p_value is close to zero).

How shall I interpret this result? There is clearly a trend so the series is (at least)not mean stationary. Running the Dickey Fuller,by adding the trend option, the series results non-stationary. When I notice a trend behaviour shall I always include a trend in my regression in order to make my analysis valid? Including more lags the situation doesn't improve. Can you help me with this puzzling outcome? Shall I consider the series non stationary and take the first difference to solve it?(I include stata outputs below) 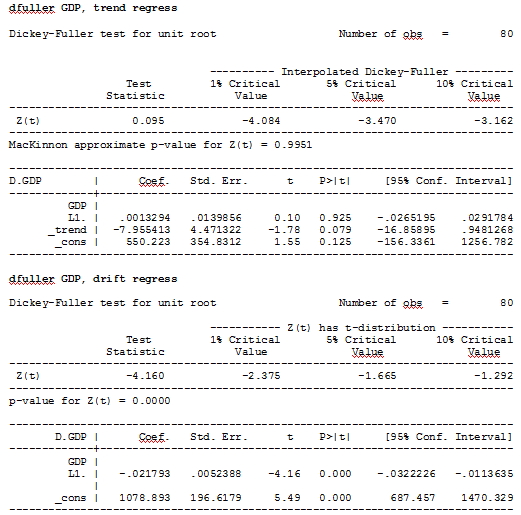 I doubt it makes sense testing for a unit root in the level of $GDP$, as the level is growing or diminishing exponentially, if we follow the ideas in the first paragraph. So if you conduct the test on $\operatorname{log}(GDP)$, perhaps your results will match the expected findings.

If they do not, then you have to make a choice: (1) believe the scheme above and blame the short sample period, a structural change or yet something else for a "weird" test result, or (2) ditch the scheme (say that it is it that is "weird") and follow the test result.

Not the answer you're looking for? Browse other questions tagged augmented-dickey-fuller or ask your own question.