Heteroscedastic test does not solve the problem

As my previous questions I'm trying to solve a problem with my stocks tests. I tried Breusch-Pagan test for heteroscedasticity but some residuals still pass these tests.

Ok, now I still get strange results, with strange i mean that when i plot the residuals i see that the variance is not constant (take a look at the chart below). So now, I need to understand how better test is the variance is constant.

I read someone use GARCH (1,1) but I never used it, could someone exmplain it or maybe give me other tests to try? 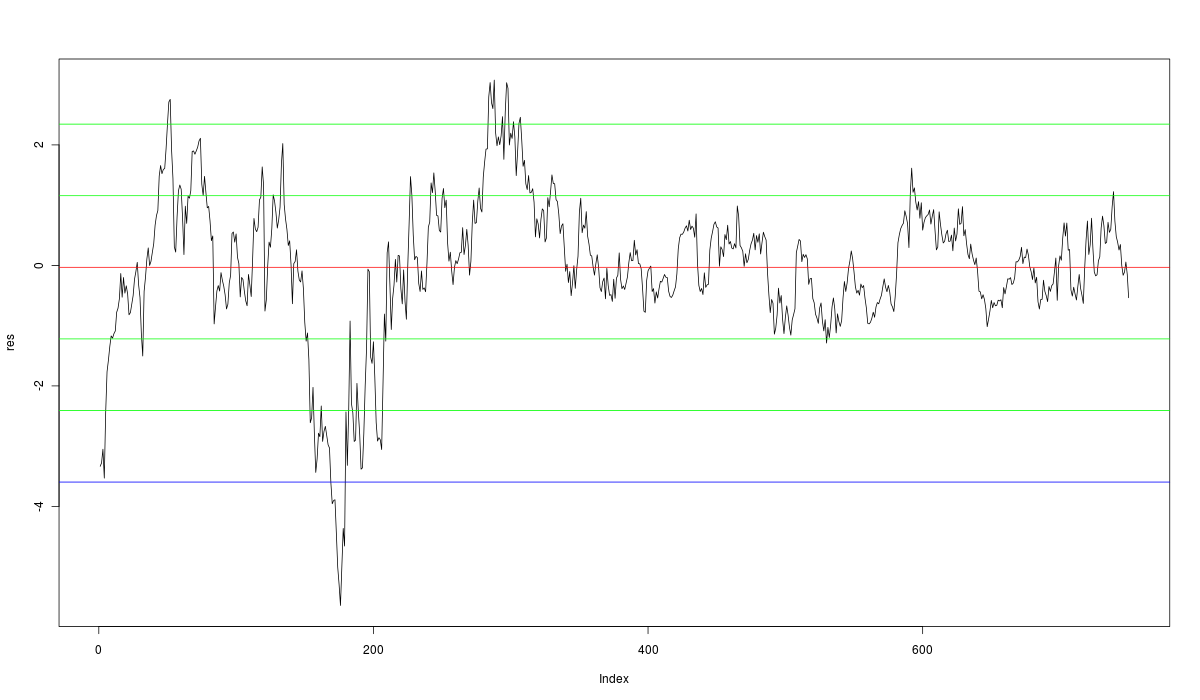 As a follow-up to the chat that Dail and I had regarding his first question...

A key assumption is that the variables in the model, not just the residuals, do not have unit roots. Upon testing, we see that the price variables do have unit roots. As a result, you can get biased answers (see CV question on spurious causation). Hence, your model is likely biased. Fixing the standard errors, as @whuber says in the comments, ignores far worse problems.

I recommended taking first differences of each variable and regressing one on the other. This gets around the spurious causation problem. In this regression, the residuals did not have any autocorrelation and did not exhibit heterogeneity. A plot of the residuals did not show any temporal patterns. Further, this model has an algebraically identical interpretation as your original one. See that $$\begin{align*} y_t &= \alpha + \beta x_t + \epsilon_t \\ - y_{t-1} &= -\alpha -\beta x_{t-1} -\epsilon_{t-1} \\ \Delta y_t &= \beta \Delta x_t + \Delta \epsilon_t \end{align*} $$ Technically, this implies that you shouldn't have an intercept term in this regression, but I think that it's generally a good idea to include one (and, in your example, the intercept term is small anyway, so it doesn't matter much).

This model displays the necessary properties to get good regresssion results while maintaining the interpretation that you are looking for.

I am reluctant to make any new suggestions (GARCH, etc), as @whuber said, because you haven't fixed any of the primary problems with your model.

Not the answer you're looking for? Browse other questions tagged r heteroscedasticity unit-root kpss-test or ask your own question.

0
How to check variance with GARCH (1,1) model?
11
What to make of explanatories in time series?