Now I wish to test if the coefficients are the same.

Am I testing them wrongly? Otherwise, where am I wrong in the reasoning above?

Short answer : Your likelihood should go down. But here, the p-values do not measure the likelihood, but whether the release of some constraints provides a significant improvement on the likelihood. That's why it's not necessarily easier to reject $\beta_1=\beta_2=\beta_3$ than to reject $\beta_1=\beta_3$ because you need to show much better likelihood improvements in the most constrained model to prove that the release of 2 degrees of freedom to reach the full model was "worth it". 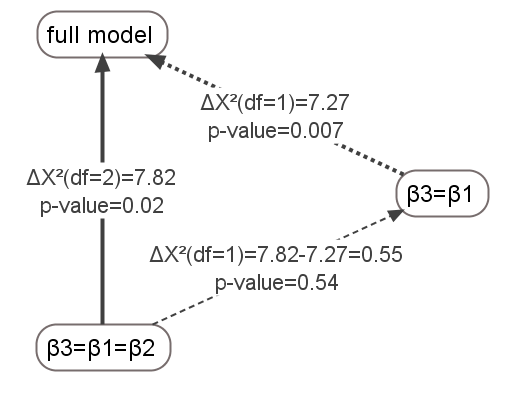 Under these conditions, there is not a big likelihood improvement by releasing one degree of freedom from $\beta_3=\beta_1=\beta_2$ model to the $\beta_3=\beta_1$ model because in the later model the estimation of $\beta_2$ can be close from the two other coefficients.

From this analysis and the two other p-values you gave one could suggest that maybe $\frac{\beta_3+\beta_1}{2}=\beta_2$ can provide a good fit.

4
In matlab, results from anova1 and multcompare disagree?