This question relates to the same analysis that I posted about yesterday, but the question is different, so I have started a new entry.

I have conducted a moderation analysis by entering continuous independent variable X, continuous moderator M, both centered to their means, and the product of the two (X.M, interaction factor) into a simultaneous regression model, which was significant. The regression coefficient for interaction term X*M is significant (but has an opposite sign to the main effects). The dependent variable is Y. 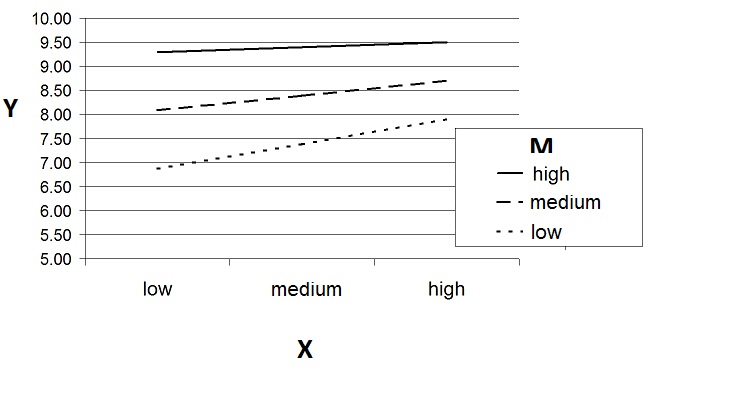 My question now is this:

The statements you propose in the question have some limitations. For example, "X was predictive of higher levels of Y at high M than at low M" would be true even if there wasn't a significant X:M interaction, provided that there were positive slopes for both X and M individually.

"The effect of M on the relationship between X and Y was greater at [higher, I assume you meant] levels of M than lower levels of M" is ambiguous, because the absolute magnitude of the effect of M on the Y/X slope is greater at higher M but the sign of the effect is negative, so that the Y/X slope becomes close to 0 at high M. In fact, the statement is so ambiguous that I wasn't quite sure which of the two "lower"s in that sentence you had intended to be "higher".

Not the answer you're looking for? Browse other questions tagged regression interaction or ask your own question.