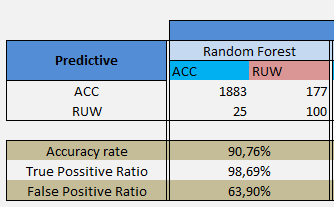 What is the reason here? And what is the model-building strategies for Random Forest?

Many default implementations of Random Forests (such as in scikit-learn) build decision trees that are very deep, which means that splits will continue to occur until only a single observation is in each terminal node (or until all the observations in a node have the same label).

To predict using a deep decision tree, an observation is sent down the tree and the average value of the training observations that created the terminal node is the value predicted by the tree.

A possible reason the predictions might not be exactly perfect is because due to the random nature of the bootstrap sample, some observations could be used in less than half of the trees and the other trees predict the incorrect class.

My advice: Don't even consider the training accuracy when using decision trees. Only consider out of sample (or out of bag) predictions.

The reason for the imbalance of TPR and FPR is based on what split point you used in your final prediction. Don't predict the class label. Instead predict the probability of the class belonging to a label (.predict_proba in scikit-learn). Then, you can choose a split point that leads to the TPR/FPR ratio you want.

Not the answer you're looking for? Browse other questions tagged r regression machine-learning random-forest accuracy or ask your own question.