First of all I have to admit that I am not a time-series expert so any help is highly appreciated. I have a financial time-series (a fixed income total return index measured on a weekly basis) for which I would like to fit an AR model. However, I would like to take into account the time varying volatility of the series. In particular, the volatility of the series is very low at the beginning of the series, increases sharply at the end of 2008 and shrinks again: 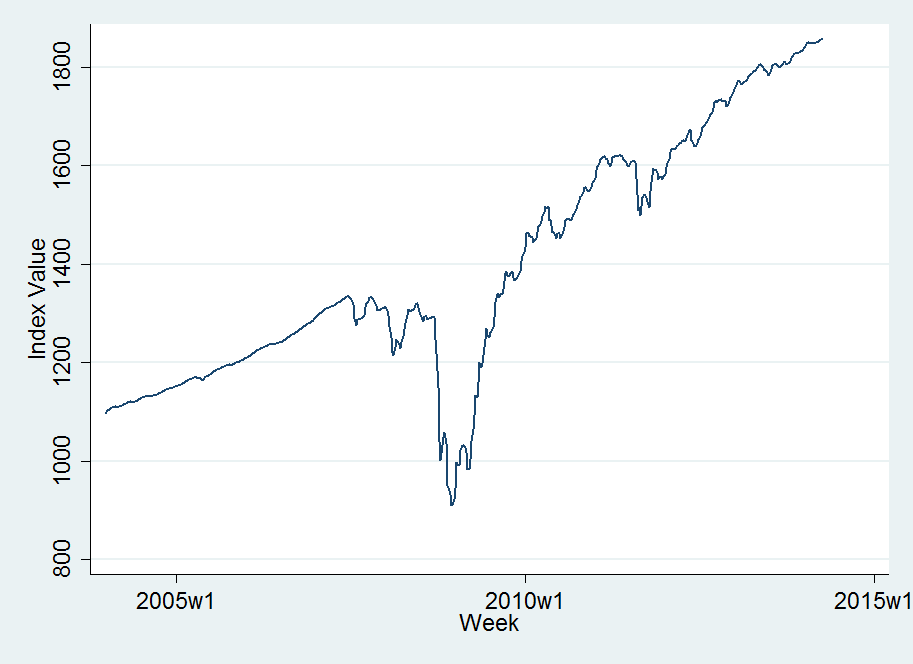 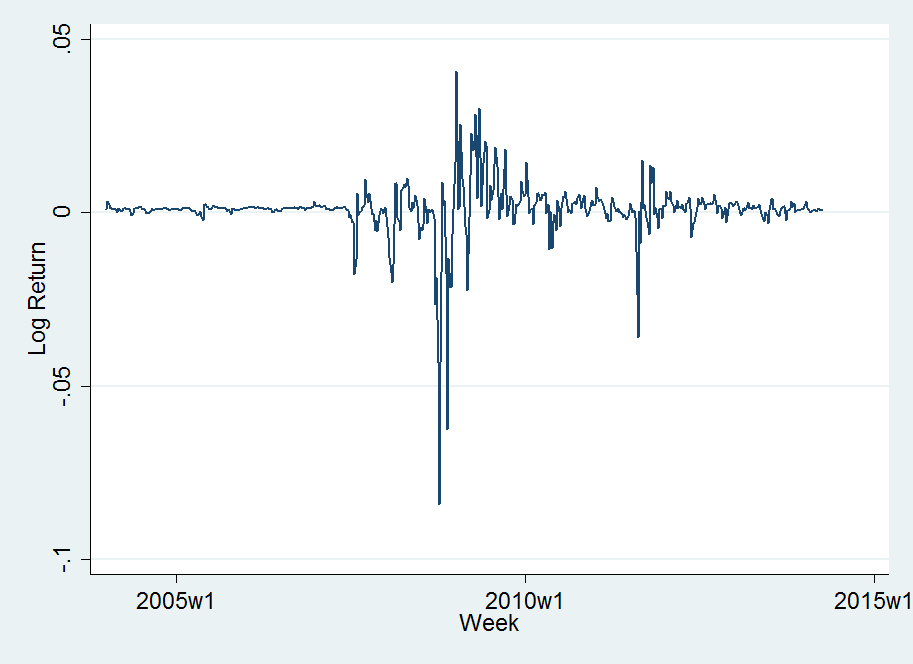 I decided upon the order of the AR model by using different information criteria which lead me to an AR(1) model for the log return time-series. After that I tested for ARCH effects using a Lagrange-Multiplier-Test. It turned out that ARCH effects are significant for all tested 12 lags. Considering the high order of the lags I considered a GARCH(1,1) for the conditional volatility. The problem is that the estimated coefficients sum to a value greater than one ($\alpha_1+\beta_1=0.97+0.56=1.53)$ implying that volatility is growing without bounds which is clearly undesirable and also is contradictory to the graph. So my questions are:

I would be also very happy about any hint to a particular Stata or R command that seem promising to model the volatility of this time series. However, I think this is primarily an econometrics question. Thanks for your time and effort!

First, you have not told us what this series represents. Subject-matter knowledge is generally useful when trying to model the data.

the volatility of the series is increasing <...> The log returns exhibit this even more clearly

It would be more accurate to say that volatility has been very low in the beginning, high for a while and then quite low again. There is no linear trend in the magnitude of volatility -- see your second figure.

You may want to reconsider the model for the conditional mean first. Perhaps you could model the apparent trend in the original series and the dip during approx. 2009 by including some other explanatory variables and turning the AR model into an ARX model. Also, you could consider ARCH-in-mean specification, as the volatility seems to have been the highest when the series was going down.
Now to answer the question, there is a great variety of GARCH models suited for different features of the data. One survey (not necessarily the best) can be found here: Terasvirta "An introduction to univariate GARCH models" (2009). You could take a look at the stylized facts and the characteristics of the different models and see if there is one that suits you.
You could also have a GARCH model with exogenous variables. E.g. a GARCH model with a time trend could suit a case where conditional variance is increasing linearly (which does not seem to be the case here, though). Or you could have an IGARCH model where the conditional variance is an integrated process. That also answers your second question:

Sorry for being a bit vague about the choice of the model, but I think it would be careless to recommend a particular model just by having seen a graph of the data.

I would be also very happy about any hint to a particular Stata or R command that seem promising to model the volatility of this time series.

In R I may recommend using "rugarch" package with main functions ugarchspec (for specifying a GARCH model) and ugarchfit (for estimating the specified model for a given data series). There is a nice vignette to consult.

the estimated coefficients sum to a value greater than one <...> implying that volatility is growing without bounds which is clearly undesirable

It is not only undesirable, but it also does not seem to fit the data -- I do not see gradually exploding volatility in the second figure.

Not the answer you're looking for? Browse other questions tagged time-series maximum-likelihood stata arima garch or ask your own question.

0
GARCH parameters sum to greater than one

3
The use of GARCH
0
Volatility clustering test in Stata, time frame issues
1
Are GARCH effects without ARCH effects possible?
3
Testing if the volatility of single stocks and/or indices have risen in the past
0
Using GARCH rolling forecast in R to calculate MAE?
5
Why fit ARMA before GARCH if I am interested in variance of the data, not the residuals?
1
Explaining volatility with GARCH: one-step or two-step approach?
1
How is modeling the time series error/variance, e.g. ARCH or GARCH models, different from modeling time varying forecast intervals?