How can I test a nonlinear vs a linear regression model?

I've got a panel regression model where the Ys assume a curved shape when plotted over time. A histogram of the residuals shows they are normally distributed but a residual-vs-fitted plot shows a pattern (see image 1). 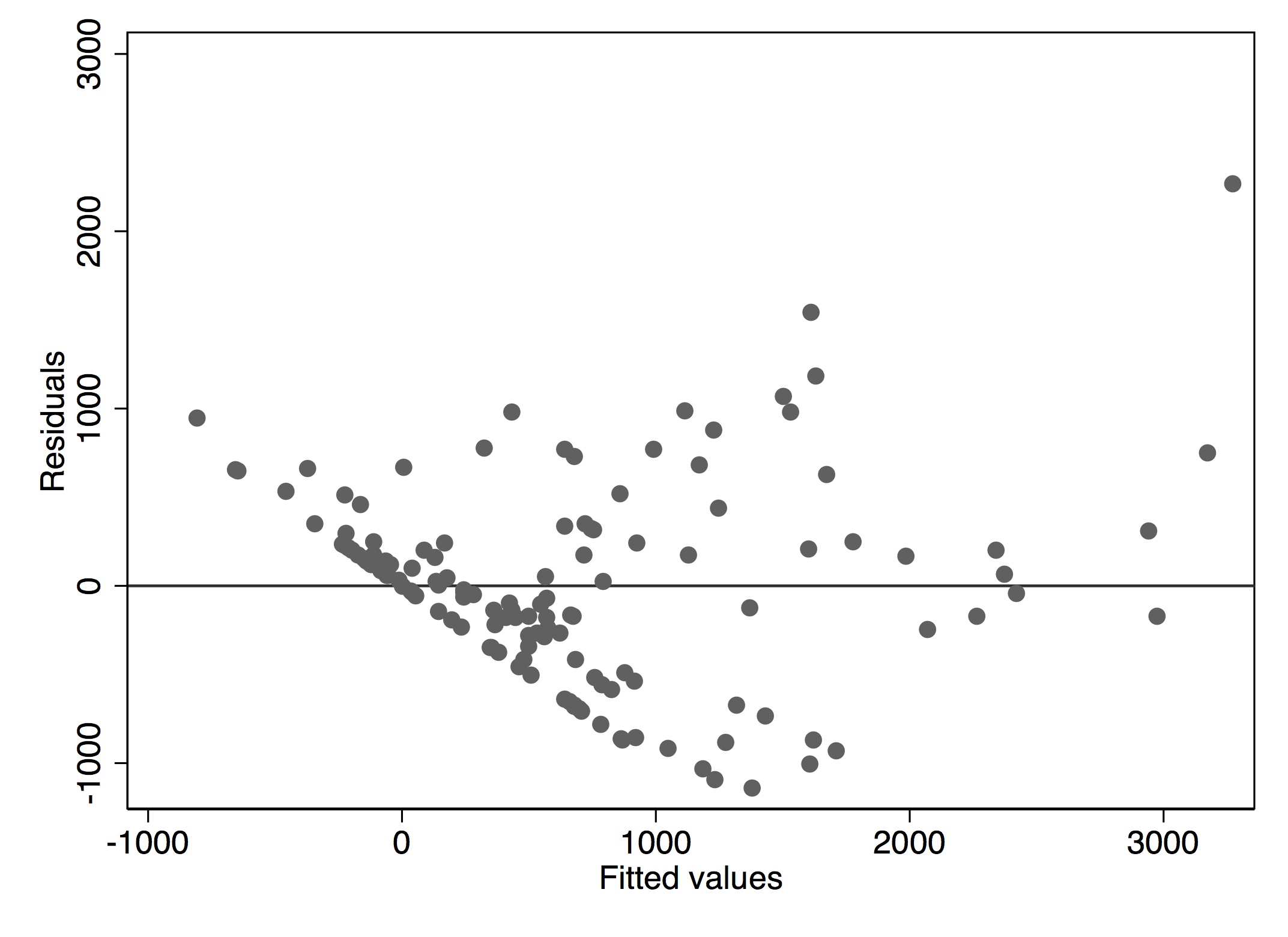 When I log-transform the Y variable (with a scalar added to the zeros), the residuals are still normally distributed and the residual-vs-fitted plot shows an even more severe pattern (see image 2). 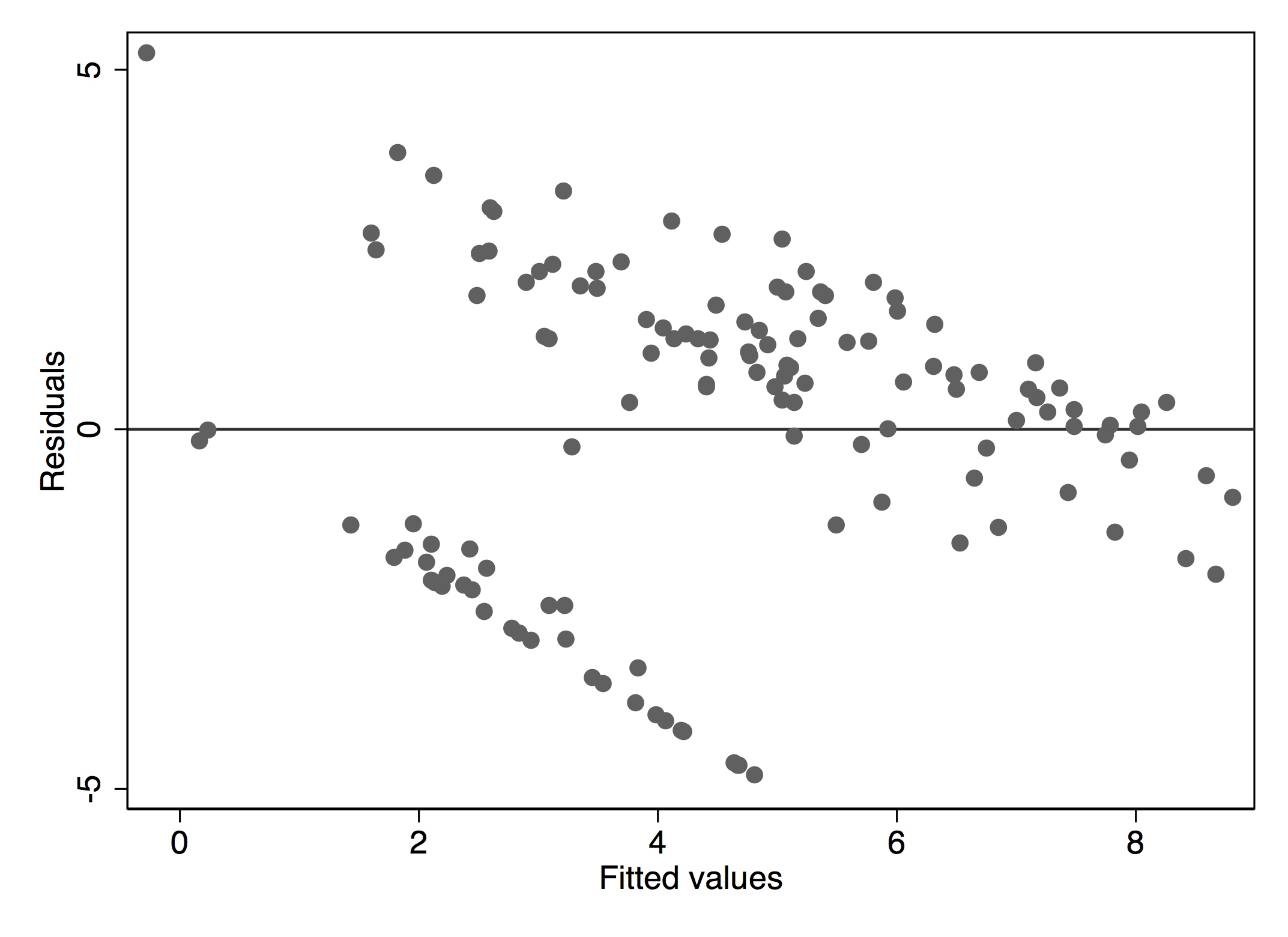 Is there an additional statistical test to determine whether a linear or nonlinear estimation technique is better for estimating this model?

Is there a better approach to dealing with the nonlinearity in my Y-variable?

Edit: thanks for the comments and thoughts!

Edit 2: Added the model as an image. 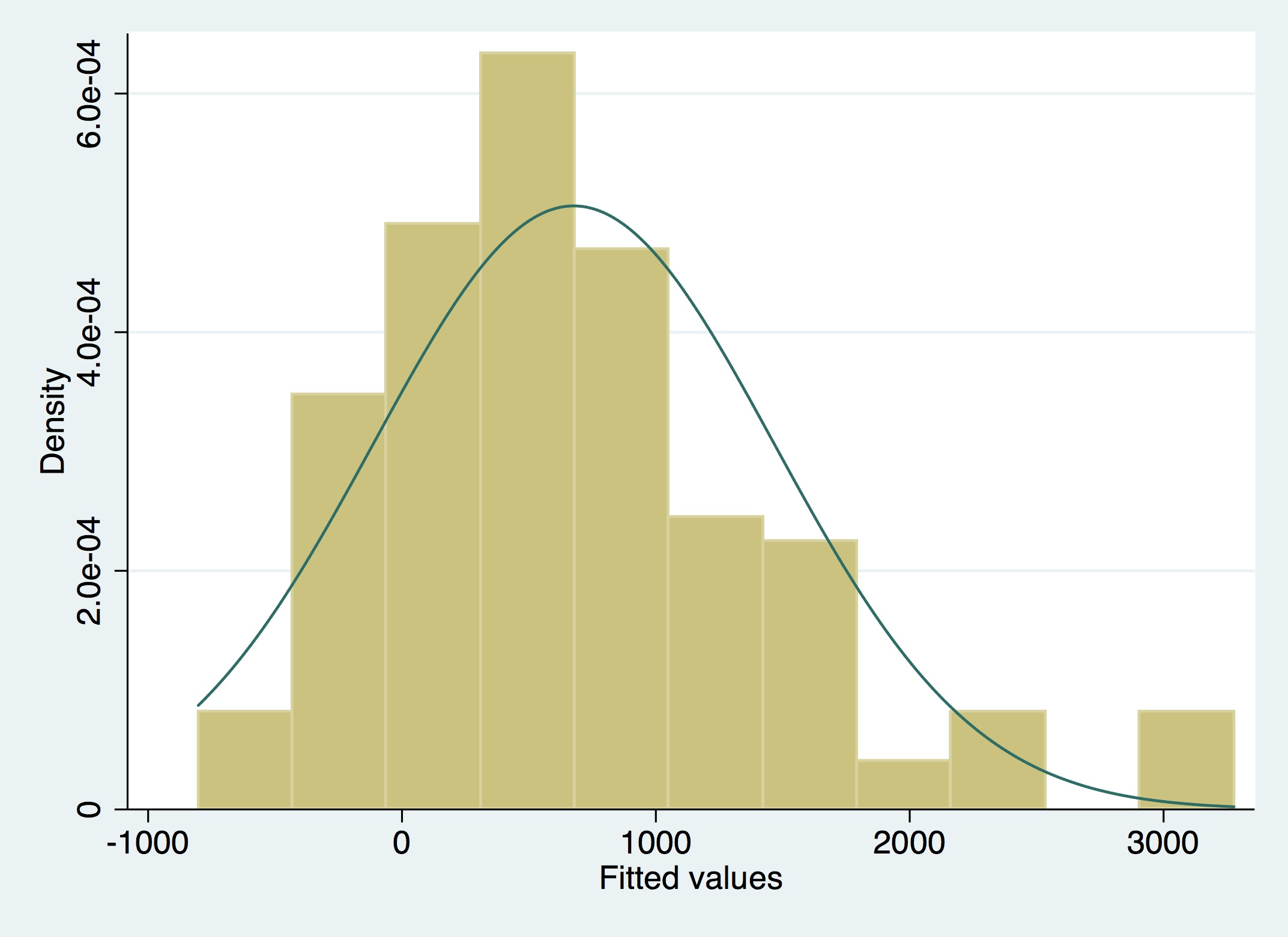 This is perhaps more of a comment than an answer, but I am not allowed to comment. This comment is meant to be complementary to the existing answer and comments.

One more thing to think about is the probability distribution of the errors. For instance, consider the model $y = a \exp(bx)$. This can be solved as a nonlinear regression model, or the logarithm of both sides can be taken and solved as a linear regression problem $\ln y = \ln a + b x$. These two models are NOT equivalent, despite frequent claims that they are (i.e., that the linear least squares version is "doing" nonlinear least squares). The errors in the linear regression version are the natural logarithms of the errors of the nonlinear least squares version. It can not be the case that both the error and its logarithm are Normally distributed (of course, neither may be), so one or the other may be better on the basis of which has errors closer to being Normally distributed.

It is clear in the plots that the distribution is not of the continuous shape that transformations will remedy. I suggest using a semiparametric model such as the proportional odds ordinal logistic model. Such a model allows for "clumping at zero" plus any other distributional oddities as long as the connection between distributions for different covariate settings is as modeled (e.g., the proportional odds assumption or proportional hazards assumption is satisfied). A detailed example is here. Note that with ordinal regression you do not bin $Y$ unless you have more than, say, 10000 intercepts in the model when using the R orm function.

There is a noticeable pattern here! The log-transformed plot show the residuals (error terms) having a high negative correlation as the fitted values increases, also the points are not randomly scattered around the zero line from left to right.  This graph suggests that the regression model which produced this result is incorrect.

On providing a better approach for dealing with nonlinearity, there's no single answer, but there are several options. One method is to adjust your model by adding a squared term to the model, e.g.

But be careful to avoid overfitting the model, as this leads to high variance when generalising to new examples.

It bears noticing that MW (your dependent variable) is truncated at zero. This should be the first thing your model accounts for. Right now, many of the fitted values are much less than zero. This means that the functional form of your regression model is misspecified.

There are a number of ways to deal with this. One consideration is to employ a technology diffusion model which assumes a "zero" origin for a time series followed by a diffusion process based on cumulants of the new MW capacity added each year for each state. Good references to this class of models are available at Rockefeller University's Program for the Human Environment. Search for publications regarding "logistic growth" here: http://phe.rockefeller.edu/current/publications

The PHE is not the only source for information about this class of models as they have been widely deployed in marketing in an effort at understanding new product sales growth. For instance, find references to "Bass new product models" or dig up this review: Peres, Muller, Mahajan, Innovation, diffusion and new product growth models: A critical review and research directions, 2009.

There are limitations to diffusion approaches: they are rooted in the internal, univariate dynamics of the trajectories of the cumulants over time and, as a general rule, do not permit use of additional predictors when estimating. Moreover, these models do not produce HAC residuals. In point of fact, given the short duration of much tech diffusion data, it's typically not even possible to fit "Box-Jenkins"-type approaches -- there just isn't enough information to initialze the "p's and q's" or lags and moving averages. They are univariate models, this means they don't lend themselves to stacking as in a pooled approach. Finally, they are criticized for being "tautological" or deterministic in positing a nonlinear or "S-shape" to their predictions.

To this last point, linear models can be criticized as being deterministic for positing an unrealistic linearity to a time series.

However, diffusion models do answer questions related to growth rates, inflection points and likely asymptotic ceilings or maximal values projected out to some reasonable point in the future, and as attainable based on the current information. Moreover, "horizons" to growth can be built as new information comes in and the model is re-estimated. Then, too, there are workarounds to the need to estimate a unique model for each state by assuming that there is one underlying diffusion process to wind power and the different adoption times by state are irrelevant. If not "irrelevant" then they represent a different behavior from the underlying process and, as such, would require models for limited dependent variables with different information capturing the drivers of adoption, not the diffusion process over time.

With these caveats noted, this approach is highly appropriate for the behaviors you're observing.

Technology diffusion has its roots in economic growth. Some of the best contributions in this field do not rely on logistic growth equations. But, as Paul Romer states in a recent, controversial paper Mathiness in the Theory of Economic Growth, American Economic Review, 2015, "In 1970, there were zero mobile phones. Today, there are more than 6 billion. This is the kind of development that a theory of growth should help us understand." Reference to this stream of work might be considered.

Not the answer you're looking for? Browse other questions tagged nonlinear-regression regression-strategies residuals nonlinearity or ask your own question.

4
Which model should I use to fit my data ? ordinal and non-ordinal, not normal and not homoscedastic

5
How to assess multilevel model assumptions using residual plots
43
Interpreting the residuals vs. fitted values plot for verifying the assumptions of a linear model
1
How to balance/interpret increasing "good fit" statistics, but seeing more departing from linear regression assumptions?
2
heteroscedasticity, residual vs. independent X variables in a multiple regression
4
How do I interpret this residual diagnostics plot?
3
Rules of thumb for partial residual (component + residual) plots as diagnostics for linearity?
3
Why is there "residual dots" in plot() of GAM?