Testing the utility of adding a continuous variable to a nonlinear regression.

Let’s say I have the hypothesis that soil fertility affects the relationship between weed biomass and crop biomass. One way to go about testing that hypothesis might be to model the relationship between weed and crop biomass at various levels of soil fertility and then deciding whether to group or separate these data (for example, through an F-test). 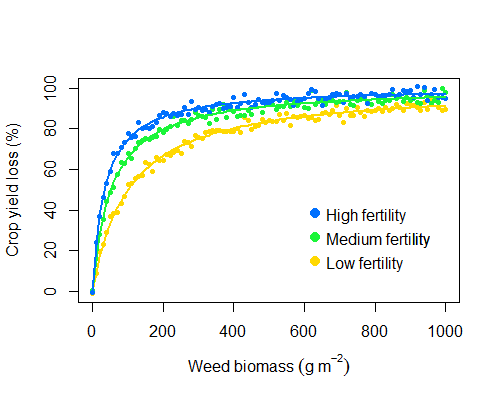 This seems less than ideal though because it treats soil fertility, which is really continuous and numerical, like it's categorical variable. Also, what if the data looks like this? 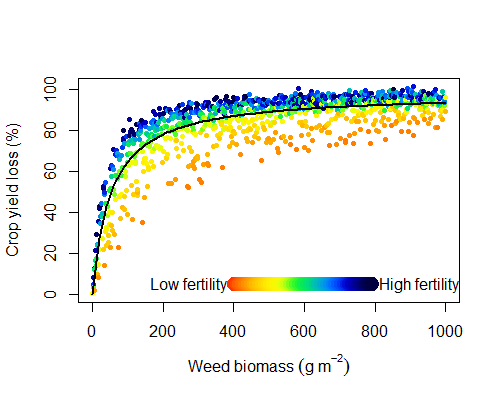 That is, instead of having data at three distinct levels of soil fertility, I have observations at a wide range of values. What can I do to ask the question, “does soil fertility affect the relationship between weed and crop biomass?” Or specifically, since this relationship is modelled by a rectangular hyperbola of the equation...

How do I ask "does soil fertility affect the slope (I) or asymptote parameter (A) of this relationship?"

I feel that I am overlooking something simple. If this were a linear regression, it would be straightforward to see if soil fertility affects the slope or intercept of the relationship, but I am having trouble understanding how I would do something similar in a nonlinear regression situation.

The general approach to evaluating the addition of a variable to a model isn't that much different for linear and non-linear models. In both cases you examine whether the reduction of residual error when you add the variable more than balances off the associated loss of a degree of freedom. This page, from the guide to a commercial software package, describes pretty simply how to use an F-test or the Akaike Information Criterion to make this assessment in non-linear regression.

Your bigger problem may be how to incorporate a variable like soil fertility into the model to begin with. For the example you show, you would have to specify a particular functional relation between that variable and the intercepts and asymptotes, and the validity of your results would depend on the choice of that relation. (Of course, linear regression also makes such a choice.)

Your choice of example raises two additional concerns, related to the use of percent crop yield loss as the dependent variable. I understand that this example is not your specific research question, but your choice of this example may indicate some additional issues you need to consider as you proceed with your own research.

First, in linear regression, a dependent variable with a necessarily restricted range like this might be better examined with a generalized linear model that transforms the dependent variable to cover the range of ($-\infty, \infty)$ before the regression. I am not sure how this is handled in non-linear regression. If you are studying agronomy there presumably is competent statistical help at your institution that can point you in the correct direction.

Second, and maybe more important, your choice of this dependent variable throws away all the information you have about maximum crop yield, and does not explicitly include the inevitable errors in measuring maximum crop yield. Throwing away data before analysis is almost never a good idea. In my opinion this example would be much better analyzed with actual crop yield as the dependent variable, and maximum yield included as a predictor variable along with weed biomass and fertility; it might even then reduce to a linear model. There presumably are strong relations among soil fertility, maximum crop yield, and weed biomass that would be more readily explored in this way.