How do gradients propagate in an unrolled recurrent neural network?

I'm trying to understand how rnn's can be used to predict sequences by working through a simple example. Here is my simple network, consisting of one input, one hidden neuron, and one output:

The hidden neuron is the sigmoid function, and the output is taken to be a simple linear output. So, I think the network works as follows: if the hidden unit starts in state s, and we are processing a data point that is a sequence of length $3$, $(x_1, x_2, x_3)$, then:

So far so good? 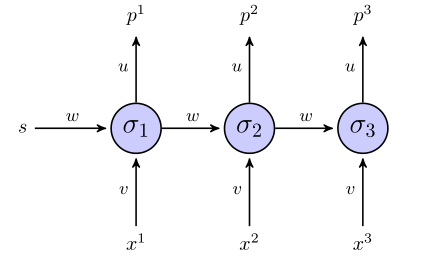 Are weights updated only once the entire sequence was looked at (in this case, the 3-point sequence)?

As for the the gradient with respect to the weights, we need to calculate $dE/dw, dE/dv, dE/du$, I will attempt to do simply by examining the 3 equations for $p^i$ above, if everything else looks correct. Besides doing it that way, this doesn't look like vanilla back-propagation to me, because the same parameters appear in different layers of the network. How do we adjust for that?

If anyone can help guide me through this toy example, I would be very appreciative.

You'd need to define $x_4$, so if you had a input sequence of length $N$ to train the RNN with, you'd only be able to use the first $N-1$ terms as input values and the last $N-1$ terms as target values.

If we use a sum of square error term for the objective function, then how is it defined?

As far as I'm aware, you're right - the error is the sum across the whole sequence. This is because the weights $u$, $v$ and $w$ are the same across the unfolded RNN.

Are weights updated only once the entire sequence was looked at (in this case, the 3-point sequence)?

Yes, if using back propagation through time then I believe so.

As for the differentials, you won't want to expand the whole expression out for $E$ and differentiate it when it comes to larger RNNs. So, some notation can make it neater:

Then, the derivatives are:

Besides doing it that way, this doesn't look like vanilla back-propagation to me, because the same parameters appear in different layers of the network. How do we adjust for that?

A more detailed but complicated worked example for an RNN can be found in Chapter 3.2 of 'Supervised Sequence Labelling with Recurrent Neural Networks' by Alex Graves - really interesting read!

Error that you describe above (after modification which I wrote in comment below the question) you can use only like a total prediction error, but you can't use it in learning process. On every iteration you put one input value in network and get one output. When you get output, you must check your network result and propagate the error to all weights. After update you will put next value in sequence and make prediction for this value, than you also propagate the error and so on.

Not the answer you're looking for? Browse other questions tagged machine-learning neural-networks deep-learning gradient-descent or ask your own question.

1
Training an Elman Recurrent Neural Network?
7
Bayesian recurrent neural network with keras and pymc3/edward
6
Neural networks - how can I interpret what a hidden layer is doing to my data?
1
Step-by-step construction of an RBF neural network
0
What is the difference between calculations and output of individual neurons in a layer of neural network?
4
In Neural Network back propagation, how are the weights for one training examples related to the weights for next training examples?
1
Understanding ReLU: Does this (unlucky intialized) network assign all instances to the same class?