I have two data sets, both resemble $y = x^2$, but say I don't know that yet. They are both evenly sampled, but the sampling rates are not the same between them, and they exist over different domains. Both sets may return data at the same $x$ value. How do I perform a regression over such a data set?

If I combine them into one large dataset, the fit will be weighted towards the dataset that has the higher density points (or the one with more total points maybe?) But, I want the two datasets to be weighted evenly in the $x$ dimension - that is, even though there is much higher data density around the point $x=5$ for the red set compared to the black set, I would want the black point to have as much weight as the red points between say $x = 4.5$ and $x=5.5$. I feel this is a very naive way of saying it, but perhaps someone with a stats background can fix this up. 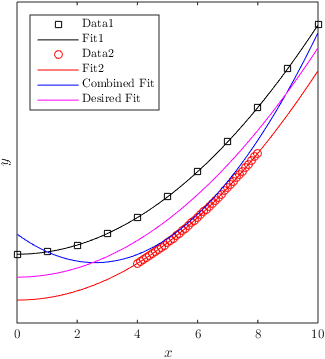 You could use weighted regression to achieve your goal. Apart from the data, for each observation a weight is given that indicates how important the error for that observation is. More information and an example here: How to use weights in function lm in R?

Are these two datasets obtained by sampling the same population? And is the data longitudinal/correlated (eg. are you sampling the same two lab mice over and over again)? If the two datasets are sampled from the same population, and the data is not longitudinal/correlated, then in my mind it is fine to merge the data. You are simply adding more data points to your sample. The difference in domain is not an issue, as long as you actually want to model the data for that entire domain.

But, I want the two datasets to be weighted evenly in the x dimension - that is, even though there is much higher data density around the point $x=5$ for the red set compared to the black set, I would want the black point to have as much weight as the red points between say $x=4.5$ and $x=5.5$.

By this, do you mean that you want ONE black point at $x=5$ to equal in weight the MULTIPLE red points between $x=4.5$ and $x=5.5$? This seems strange to me, because you're essentially saying that you trust the black measurements much more than the red measurements, but if you are using the same setup and same sampling population, I don't see why this should be the case?

It would help if there was more information :) but hope this is helpful!

21
How to use weights in function lm in R?

5
Data cleansing in regression analysis
1
Relating parameters to a measured variable
4
Regression: Scatterplot with low R squared and high p-values
2
linear regression when curve go up then down
0
Regression for two continuous variables, with averages around each data point?
3
Detecting relationships between two sets of circular data
0
Significance levels of the estimated logistic regression coefficients for artificially generated data sets