Why use extreme value theory?

I'm coming from Civil Engineering, in which we use Extreme Value Theory, like GEV distribution to predict the value of certain events, like The biggest wind speed, i.e the value that 98.5% of the wind speed would be lower to.

My question is that why use such an extreme value distribution? Wouldn't it be easier if we just used the overall distribution and get the value for the 98.5% probability?

Disclaimer: At points in the following, this GROSSLY presumes that your data is normally distributed. If you are actually engineering anything then talk to a strong stats professional and let that person sign on the line saying what the level will be. Talk to five of them, or 25 of them. This answer is meant for a civil engineering student asking "why" not for an engineering professional asking "how".

I think the question behind the question is "what is the extreme value distribution?". Yes it is some algebra - symbols. So what? right?

Lets think about 1000 year floods. They are big.

When they happen, they are going to kill a lot of people. Lots of bridges are going down.
You know what bridge isn't going down? I do. You don't ... yet.

Question: Which bridge isn't going down in a 1000 year flood?
Answer: The bridge designed to withstand it.

The data you need to do it your way:
So lets say you have 200 years of daily water data. Is the 1000 year flood in there? Not remotely. You have a sample of one tail of the distribution. You don't have the population. If you knew all of the history of floods then you would have the total population of data. Lets think about this. How many years of data do you need to have, how many samples, in order to have at least one value whose likelihood is 1 in 1000? In a perfect world, you would need at least 1000 samples. The real world is messy, so you need more. You start getting 50/50 odds at about 4000 samples. You start getting guaranteed to have more than 1 at around 20,000 samples. Sample doesn't mean "water one second vs. the next" but a measure for each unique source of variation - like year-to-year variation. One measure over one year, along with another measure over another year constitute two samples. If you don't have 4,000 years of good data then you likely don't have an example 1000 year flood in the data. The good thing is - you don't need that much data to get a good result.

Here is how to get better results with less data:
If you look at the annual maxima, you can fit the "extreme value distribution" to the 200 values of year-max-levels and you will have the distribution that contains the 1000 year flood-level. It will be the algebra, not the actual "how big is it". You can use the equation to determine how big the 1000 year flood will be. Then, given that volume of water - you can build your bridge to resist it. Don't shoot for the exact value, shoot for bigger, otherwise you are designing it to fail on the 1000 year flood. If you are bold, then you can use resampling to figure out how much beyond on the exact 1000 year value you need to build it to in order to have it resist.

Here is why EV/GEV are the relevant analytic forms:
The generalized extreme value distribution is about how much the max varies. The variation in the maximum behaves really different than variation in the mean. The normal distribution, via the central limit theorem, describes a lot of "central tendencies".

This is NOT the "standard normal distribution": 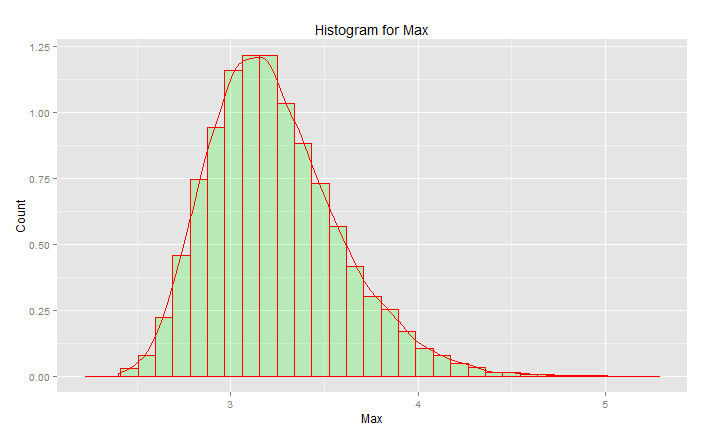 The peak is at 3.2 but the max goes up toward 5.0. It has skew. It doesn't get below about 2.5. If you had actual data (the standard normal) and you just pick the tail, then you are uniformly randomly picking something along this curve. If you get lucky then you are toward the center and not the lower tail. Engineering is about the opposite of luck - it is about achieving consistently the desired results every time. "Random numbers are far too important to leave to chance" (see footnote), especially for an engineer. The analytic function family that best fits this data - the extreme value family of distributions.

Sample fit:
Let's say we have 200 random values of the year-maximum from the standard normal distribution, and we are going to pretend they are our 200 year history of maximum water levels (whatever that means). To get the distribution we would do the following:

(code presumes the above have been run first)

These can be plugged into the generating function to create 20,000 samples

Building to the following will give 50/50 odds of failing on any year:

Here is the code to determine what the 1000 year "flood" level is:

Building to this following should give you 50/50 odds of failing on the 1000 year flood.

To determine the 95% upper CI I used the following code:

This means, that in order to resist the large majority of 1000 year floods, given that your data is immaculately normal (not likely), you must build for the ...

PS: more fun - a youtube video (not mine)
https://www.youtube.com/watch?v=EACkiMRT0pc

Footnote: Coveyou, Robert R. "Random number generation is too important to be left to chance." Applied Probability and Monte Carlo Methods and modern aspects of dynamics. Studies in applied mathematics 3 (1969): 70-111.

If you are only interested in a tail it makes a sense that you focus your data collection and analysis effort on the tail. It should be more efficient to do so. I emphasized the data collection because this aspect is often ignored when presenting an argument for EVT distributions. In fact, it could be infeasible to collect the relevant data to estimate what you call an overall distribution in some fields. I'll explain in more detail below.

If you're looking at 1 in 1000 years flood like in @EngrStudent's example, then to build the normal distribution's body you need a lot data to fill it with observations. Potentially you need every flood that has occurred in past hundreds of years.

Now stop for a second and think of what is exactly a flood? When my backyard is flooded after a heavy rain, is it a flood? Probably not, but where exactly is the line that delineates a flood from an event that is not a flood? This simple question highlights the issue with data collection. How can you make sure that we collect all the data on the body following the same standard for decades or maybe even centuries? It's practically impossible to collect the data on the body of the distribution of floods.

Hence, it's not just a matter of efficiency of analysis, but a matter of feasibility of data collection: whether to model the whole distribution or just a tail?

Naturally, with tails the data collection is much easier. If we define the high enough threshold for what is a huge flood, then we can have a greater chance that all or almost all such events are probably recorded in some way. It's hard to miss a devastating flood, and if there's any kind of civilization present there'll be some memory saved about the event. Thus it makes a sense to build the analytic tools that focus specifically on the tails given that the data collection is much more robust on extreme events rather than on non-extreme ones in many fields such as a reliability studies.

You use extreme value theory to extrapolate from the observed data. Often, the data you have simply isn't big enough to provide you with a sensible estimate of a tail probability. Taking @EngrStudent's example of a 1-in-1000 year event: that corresponds to finding the 99.9% quantile of a distribution. But if you only have 200 years of data, you can only compute empirical quantile estimates up to 99.5%.

Extreme value theory lets you estimate the 99.9% quantile, by making various assumptions about the shape of your distribution in the tail: that it's smooth, that it decays with a certain pattern, and so on.

You might be thinking that the difference between 99.5% and 99.9% is minor; it's only 0.4% after all. But that's a difference in probability, and when you're in the tail, it can translate into a huge difference in quantiles. Here's an illustration of what it looks like for a gamma distribution, which doesn't have a very long tail as these things go. The blue line corresponds to the 99.5% quantile, and the red line is the 99.9% quantile. While the difference between these is tiny on the vertical axis, the separation on the horizontal axis is substantial. The separation only gets bigger for truly long-tailed distributions; the gamma is actually a fairly innocuous case. 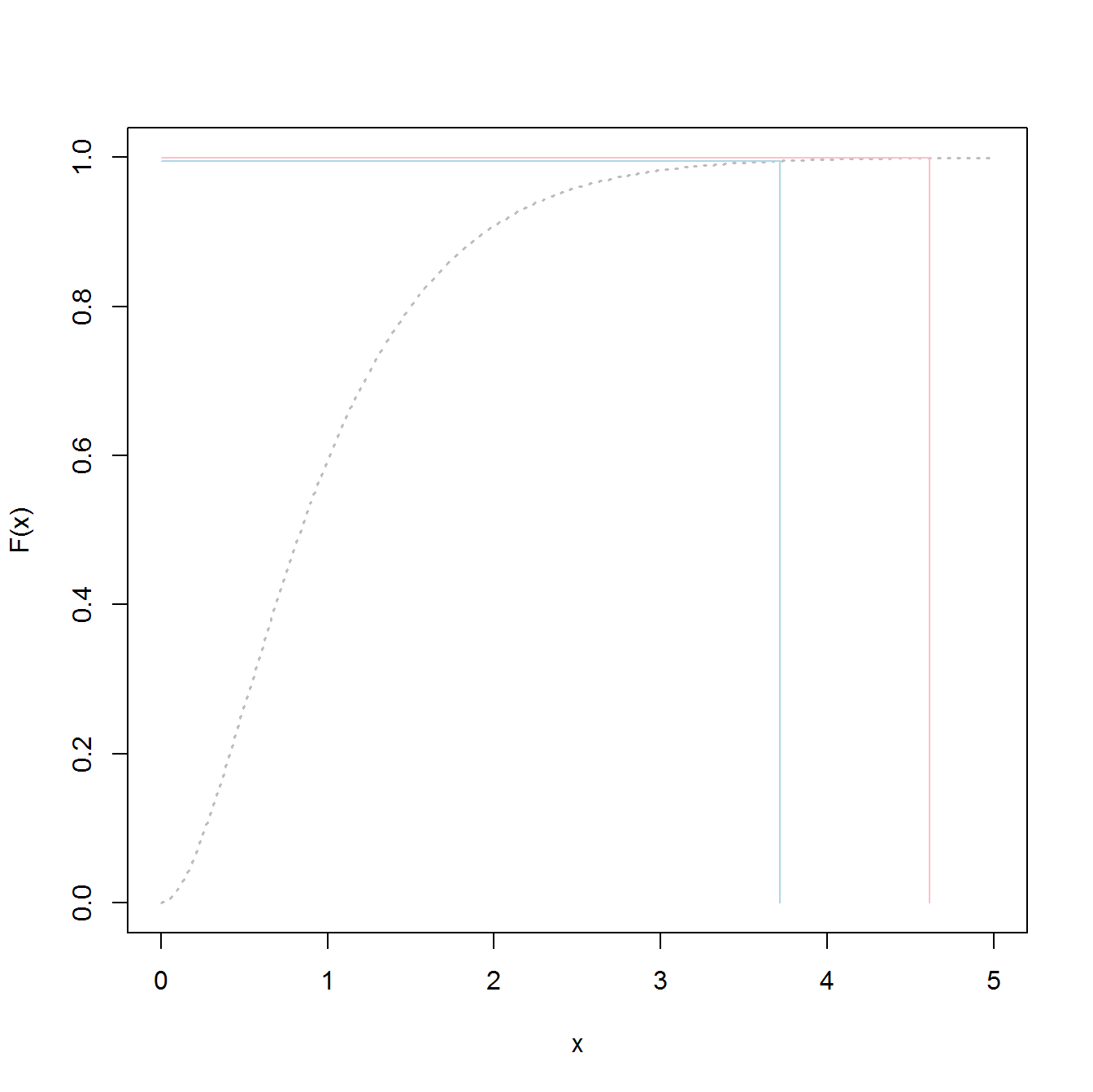 Usually, the distribution of the underlying data (e.g., Gaussian wind speeds) is for a single sample point. The 98th percentile will tell you that for any randomly selected point there is a 2% chance of the value being bigger than the 98th percentile.

I'm not a civil engineer, but I'd imagine what you'd want to know is not the likelihood of the wind speed on any given day being above a certain number, but the distribution of the largest possible gust over, say, the course of the year. In that case, if the daily wind gust maximums are, say, exponentially distributed, then what you want is the distribution of the maximum wind gust over 365 days...this is what the extreme value distribution was meant to solve.

The use of the quantile makes the further calculation simpler. The civil engineers can substitute the value (wind speed, for instance) into their first-principle formulas and they obtain the behavior of the system for those extreme conditions that correspond to the 98.5% quantile.

The use of the whole distribution could seem to provide more information, but would complicate the calculations. However, it could allow the use of advanced risk-management approaches that would optimally balance the costs related to (i) the construction and (ii) the risk of the failure.

13
Does there exist someone faster than Usain Bolt today?
2
Are confidence intervals only for a specific population parameter, like the mean? What about the whole population range, e.g. for outlier detection?