Modelling a distribution for discrete and not unimodal values

How can I modeling a distribution for these kind of data?

For everyone of them I have some boundary and I can calculate mean and standard deviation.

The second question is: If I receive a new value for the attribute RAM ... for example 64 GB that is out of bound... there is a way to get a probability that 64 GB could be a new value???

So what I need is a way to estimate that the 64 GB could be a new value of RAM because it is very close to my distribution... but 512 GB can't be in any way a new RAM value.

So I need a function that return me a number close to 1 for the 64 GB and close to 0 for the 512 GB value... How can I do that? Gaussian kernel density?

NOTE 1 I have a catalogue and I can extract all possible value for a specific attribute and I need to model their distribution. I don't need the negative part... as all the attributes that I'm considering haven't negative values

These are a portion of my data. Between parentheses there is the frequency of the value. I want to do it because if a receive a new value I want to know if it a fair value.

I think that for the RAM attribute all values must be converted to KB.

A technique I have had some success with, is to use a kernel density estimate (KDE) to model arbitrary and non-analytical continuous distributions. This would work well for your distribution of phone weights, for example. You can then use the KDE to estimate the likelihood of an additional observation. This tells you the probability of observing the new data point, under the p.d.f. given by your model (the KDE, in this case).

Some care is required with correcting the amplitude to get a valid p.d.f., or to convert it to a reasonable likelihood function. 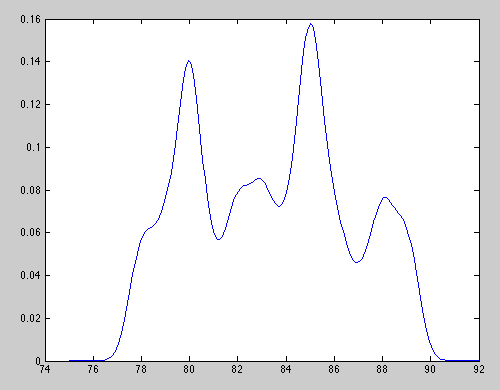 You can play with the bandwidth parameter until you are happy that the estimated density captures the structure of your data. You then need to ensure the function has an appropriate amplitude: for example, the probability of obtaining a weight of "89" should be something like 126/1860 for your dataset. You can incorporate this by computing a weighting factor for the density:

However, you could define a random variable that describes a property of a set of computers. For example, "Suppose you grabbed a computer at random from {this office, that warehouse, one of our users}. Let's call that computer's RAM capacity $R$?" $R$ is a random variable and it does make sense to talk about the distribution of $R$.

It's unlikely that $R$ or any of other properties are exactly normally distributed. The normal distribution is unimodal (it's got one peak) and continuous (it assigns a probability to any value). In practice, CPU speed, cache size, and RAM amount are pretty discrete. You can't buy a chip with 3,534,234 bytes of RAM on it--your choices are typically 1, 2, 4,...32 GB. Likewise, while CPU speeds can vary a little bit due to over/unclocking (etc), they're going to be clustered around 2.2, 2.4, 2.7 GHz. The weight of a phone is likely to be more continuous, but even so...it's unlikely to be unimodal: there's a market for enormous phones with high-quality screens, as well as a market for small, cheap phones, but there might not be much in the middle.

Finally, there's no way for values to be "outside" a normal distribution. Its two tails extend to $\pm \infty$, although the probability of seeing something very far from its mean gets incredibly small. This actually points out another problem with your proposed approach: all the quantities you've described are strictly positive (you can't have a phone that is 0 grams or a computer with -4 Gb of RAM), while the normal distribution assigns probability to all positive AND negative numbers.

Update: As people have noted in the comments, the "best" model depends on your goal as well as the data. If you're attempting to model (e.g.) price as a function of the phone's specs, you might be able to leave the data as is--the distribution of residuals matters more than the distribution of the data per se.

Alternatively, you could use your catalogue as a a discrete distribution. This might be a good choice if you're modelling a relatively "closed" population (e.g., Users prefer machines that run at 2 GHz; how often are "acceptable" nodes available in our lab?) There are 1464 examples (in the CPU Frequency part), and 528 of them have a speed of 1.2 GHz, so P(speed=1.2 GHz) = 528/1464, or about 0.36. There are a few options for handling "new" values that don't show up in the original data set. You could add an "unknown" bin, or two bins (smaller than the min, bigger than the max). One common trick is to treat "rare" data as unknown, so you might initially use the 21 samples with a 2.26 GHz CPU to seed the P(>2.2 GHz) bin. As time passes, you may end up with more and more data in that bin, in which case you may need to revisit the model.

As I realize from your question, you can run a test to see if data follow a normal distribution or not. This is a definition from wikipedia :

In statistics, normality tests are used to determine if a data set is well-modeled by a normal distribution and to compute how likely it is for a random variable underlying the data set to be normally distributed.

Your second question is not clear because normal distribution spans all over $(-\infty,\infty)$ and it is not bounded. Then you can have some values but the probability of occurrence is too low.

Not the answer you're looking for? Browse other questions tagged distributions normal-distribution kernel-smoothing or ask your own question.